Video games are quietly winning the entertainment war. And these aren’t just fun ways to kill time anymore. The reality is it’s a booming industry, and a top esports stock could make a 100% return for those who buy soon.

You see, since the first commercially successful video game came out in 1972, people were hooked. 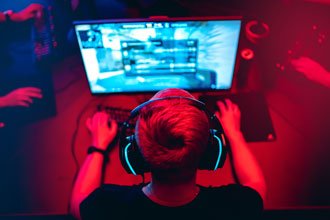 Pong was just a simple tennis-like game where players use paddles to hit a ball back and forth. But it was more than that – it was a huge technological step and an escape for kids and adults across the world.

Then in 1978 Atari released Space Invaders, an arcade game where a pilot would shoot descending aliens, preventing them from reaching the bottom of the screen. That year, Atari would lay what would be the cornerstone in one of the hottest sectors of gaming: esports. In 1980, 10,000 gamers would compete against each other in the “Space Invaders Championship.”

And the industry changed forever.

As the video game industry grew, so did esports. In 2000, South Korea held the first World Cyber Games, and games like StarCraft allowed people to compete against each other across the globe online.

Today, video games have clearly won the screen-time war and have been growing their share of consumers’ attention and income for years. In fact, in 2019, video games brought in $120 billion. That’s more than 10 times all box office movies in the United States combined. That includes blockbuster hits like Avengers, Star Wars, and Frozen.

Just to give you an idea of how big the industry is, just look at these numbers:

With this rise of live-streaming, multi-player games like Fortnite, and a growing prize pool for tournaments, esports and competitive gaming have gone mainstream.

The gaming audience on YouTube and Twitch is over 400 million, an audience larger than Netflix and larger than the viewership of the NHL and MLB.

WARNING: It’s one of the most traded stocks on the market every day – make sure it’s nowhere near your portfolio. WATCH NOW.

The opportunity is huge, and with the average millennial gamer spending $112 a month, this one small company I’m looking at could profit as the industry grows.

It’s an opportunity to book gains upwards of 100%…

Get in Early with the Best Esports Stock

The company is Super League Gaming Inc. (NASDAQ: SLGG). It is an esports company that hosts recreational esports video game league events and has developed a cloud-based platform that connects its network of gamers, venues, and brand partners.

It targets the competitive amateur player market, and if just 10% of gamers participated in the amateur esports economy at $5/month, it’s a $15 billion-plus new market category.