During the Japan Fighting Game Publishers Roundtable, Bandai Namco representatives announced that two sets of online events would be running for Tekken 7 and SoulCalibur VI.

While there are no specific dates available, Bandai has provided a rough outline of when each tournament will run. There are no plans to use these events as an overarching circuit like the previously canceled World Tour events, but will instead simply be run as individual, regional events. 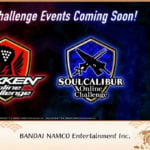 SoulCalibur players won’t need to memorize much because the event is only going to be open in three regions over the course of two months.

In September, the event will be played out in Japan, while Europe and the United States will run in November. Specific details about how the regions will be split up have not been shared yet, but the US is listed as East and EU as West.

Tekken will be a little more spread out, covering six different regions, EU, US, Oceania (Australia,) Korea, Japan, and the Philippines. The EU and US regions (including Canada) have been split into different sub-regions, which makes the SoulCalibur listing even weirder.

Registration for US West qualifiers are live now on Smash.gg for Tekken players in these territories:

More details about each event will be revealed closer to September as Bandai Namco prepares to host the first first-party Tekken and SoulCalibur events since the pandemic began.