Streamer and creator Akosi Dogie of the Philippines took home the SEA Content Creator of the Year award – the show’s top award as well as the Streamer of the Year award. He currently boasts over 10 million followers across all social media platforms.

In the esports category, RRQ (Indonesia) and Buriram United Esports (Thailand) shared the top spot for outstanding and consistent performance, sportsmanship, and mettle in the game.

“On behalf of the team and all the esports players in Thailand, thank you to PVP Esports and SuperGamerFest 2020 for giving us this opportunity and recognition,” said Buriram United Esports.

“Thank you to all the fans who voted – it’s been an honor for us to win this award, and a special thank you to our families and all the fans and our team. Everyone has given more than a hundred percent to allow us to be here today, and we promise to continue to push and strive to be better.”

The SuperGamerFest Awards received over 100,000 nominations over a month, as fans had their say in their favorite esports and gaming talents. The list of nominees was then judged by both a quantitative analysis and a panel of judges across esports, telco and media industries to pick the winners. 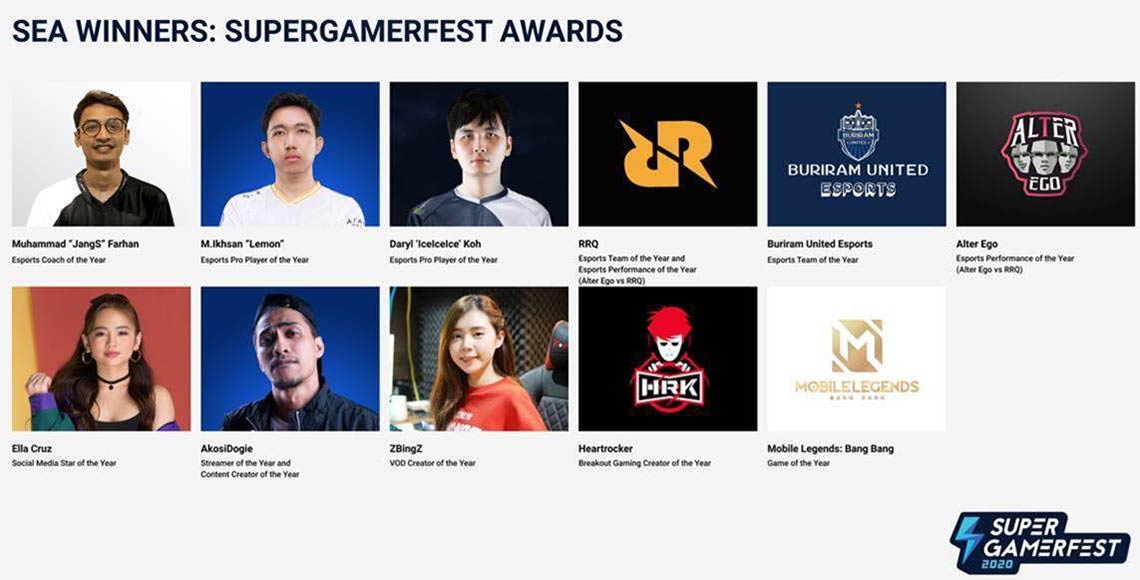 The SuperGamerFest Awards was created especially to champion and recognize the dedication and achievements of esports professionals and gaming creators who continue to contribute to the growing industry in Southeast Asia.

Fans can catch up on what they missed at http://pvpesports.gg/supergamer2020 to access on-demand digital content including interviews with back-to-back The International champions OG and the CEO of Team Secret, John Yao.

Presented by PVP Esports, SuperGamerFest 2020 was powered by Singtel and Globe, Singtel’s joint venture in the Philippines.