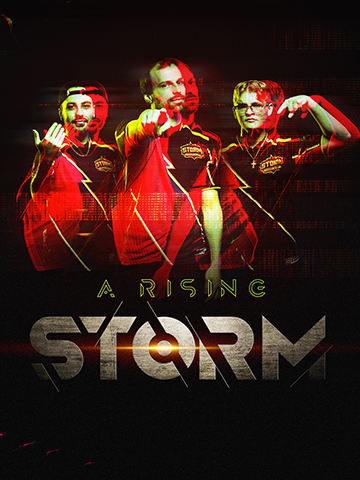 So starts the trailer for a new locally produced documentary called “A Rising Storm,” which chronicles Harrisburg University’s ambitious efforts to rapidly become a major player in the global e-sports industry.

The 30-minute documentary has its premiere on Thursday at the PAX Online 2020 gaming festival. It then will be available worldwide via Amazon video, Apple TV and Google Play.

The film not only highlights the local team, the HU Storm, but it also was produced locally, a collaboration between Harrisburg University, city-based marketing agency, Pavone, and Harrisburg production company, Cowboy Bear Ninja.

According to HU, Pavone developed the storyline for “A Rising Storm” and then recommended Emmy Award-winning filmmaker Adrian Selkowitz as director.

“I couldn’t believe that a national champion esports team was right here in my backyard, and no one was talking about it,” Selkowitz said. “I knew immediately that I had to tell the story.”

The film examines how HU took its e-sports program from inception to success in just two years, capturing numerous national tournaments including, this past July, the Operating System NYC Collegiate Championship for Overwatch. It addresses how HU went about the process of founding a program, hiring coaching staff, recruiting players and putting together a path to victory.

“It spotlights the team and the many people who work hard behind the scenes to help these students realize their dreams,” Smeltz said.

In the process, the team helped elevate the stature of its home city.

“In addition to our teams’ success, a project like this, that helps to revitalize our hometown of Harrisburg while bringing international attention to Harrisburg University and our program, validates our efforts and is something we’re very proud of,” said HU President Eric Darr.

“A Rising Storm” premieres on Sept. 17 at 2:45 p.m. at PAX Online. It then can be viewed on Amazon video, Apple TV and Google Play. Click here to watch the trailer.