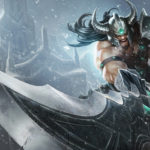 Considering how quickly mobile gaming grew over the past decade, it’s surprising that it took this long for League of Legends, the most popular MOBA title in the world, to make its entrance to the mobile scene. It’s better to be late than never, though, and Riot Games is finally rolling out Wild Rift, the mobile version of League.

While the game looks exactly like its PC version on mobile, Wild Rift wasn’t ported to the platform. The developer re-coded the whole game from scratch and updated most of the models in the process to make the game look as good as possible.

Most old-school gamers may believe that the mobile gaming community is less competitive in terms of gameplay, but that is certainly not the case.

Mobile games are much more accessible than their PC counterparts, increasing the total player counts to unimaginable levels. Not only is Wild Rift a competitive game by nature, the fact that it’s also supported by one of the best tournament organizers in Riot will be the fuel of millions of players aiming to achieve higher ranks.

Knowing the game’s ins and outs, including the meta, will be crucial in making your way to the top. No matter how good you are at Wild Rift, you’ll always be one step behind if you don’t play the most overpowered champions of the current meta.

The following champions have been dominating their lanes over the past few months, but it can take only a couple of nerfs or a new champion to put an end to their reign. Use them as much as you can but don’t be afraid of changing your methods when a new patch rolls out.

Here’re the best champions in Wild Rift for each lane.

More often than not, the Baron or the top lane will be the most isolated corner of the map. Picking champions with self-sustaining abilities is the key to surviving possible ganks from the enemy jungler.

Enchanting your boots with teleportation will allow you to react to any situation around the map, and if nothing goes according to plan, you can always start split-pushing to divide the enemy’s attention.

Alongside being tanky, the following champions are also powerful enough to solo-kill most of the champion pool in Wild Rift.

Tryndamere is the equivalent of a ticking bomb in the Baron lane. With a kit that gives him all the damage he needs, this bloodthirsty warrior gets even stronger when he’s low on HP.

Each hit Tryndamere lands increases his chance to land a critical hit, and this turns him into one of the heaviest hitters in the game when it combines with his first spell. Bloodlust increases Tryndamere’s attack damage based on the health he’s missing. His third spell, Spinning Slash, lets him get in and out of fights. Combined with an ultimate that makes Tryndamere immortal for five seconds, your enemies will need to think thrice before engaging you.