After a successful Winter update that introduced a plethora of new content, including a ‘Forge’ mode that allowed players to create iconic maps, 343 Industries have released a December Update to wrap up 2022 with new features that expand upon the available existing content. With a new multiplayer map, Empyrean, the upcoming update makes Armor Cores available for all players. Previously, Armor Cores could be unlocked through limited-time events or battle passes.

After releasing a Forge Mode that allowed Halo fans across the world to create custom maps within the game, 343 Industries have now enabled players to find matches with custom rulesets in CGB. The Custom Game Browser displays currently active Custom Games that players can join immediately without waiting in a lobby. In the first page, the CGB displays a list of 12 active custom game sessions. Players can scroll down to find more.Once the Custom Game ends, all players in the session remain in the same Fireteam. The Fireteam leader can then start a new Custom Game.

With the introduction of custom games, players have complete freedom to host their own Custom Game that other players can join. Custom Games can use any mode and map combination, including combinations not used in the original matchmaking playlists by Halo Infinite’s development team. All Forge maps and modes are supported in the Custom Game Browser. The Custom Game’s Fireteam Leader can select any map or mode that they have bookmarked or saved. To view and join a Custom Game Browser session, navigate to the Community tab of the main menu then select Customs Browser.

In the Customs Browser menu, use the Join shortcut listed along the bottom of the screen to instantly join the selected Custom Game or use the View Details shortcut to view a session’s Details menu. The Customs Browser menu lists 12 sessions per page with each session being represented by their map and mode names as well as a thumbnail of the map. The shortcuts listed near the top right corner of the session tiles will navigate between pages.

The Filters menu located to the right of the tiles allows players to change the Custom Game Browser’s sorting and limit which sessions are shown. When changing Filter options, players need to refresh the list to see the updated search results.

The Refresh shortcut listed along the bottom of the screen will update the Custom Game Browser’s listed sessions. In addition to updating the results due to changed Filter options, refreshing the Customs Browser menu will show newly created Custom Games or remove Custom Games that have since ended or occupied.

How do I invite a friend to a Custom Game Session?

To invite a friend to the Fireteam prior to joining or starting a Custom Game Browser session, players need to follow the steps below:

To invite a friend to an in-progress CGB session, player needs to ensure the session has open slots and then follow the steps below:

The newest update makes Armor Cores available for all players without purchasing a premium battle pass or completing limited time events. The cores and coatings are available to both new and returning players for free.

How do I equip or change an Armor Core?

To equip or change the existing Armor Core, players need to follow the steps below:

How do I equip different Armor Coatings?

To change which Armor Coating is equipped on an Armor Core, follow the steps below:

Improved the behavior around a physics bug that allowed players to “snap slide” in multiplayer maps. “Curb sliding” has not been adjusted and will continue to work with this update.

Developer Notes
Movement is always tricky to balance. The developer team wants players to express their movement skill in matches, but we also don’t want that movement tech to completely break maps or create unpredictable gameplay flow. For example, “Curb sliding” and its current uses have been fun to watch and hasn’t been interrupting gameplay flow too much. On the other hand, “snap sliding” allows players to make jumps that could truly break the game flow.

If two players with broken shields melee each other at the same time and one is wielding an Energy Sword, both players will now die.

Developer Notes
To make Energy Sword less effective that usual on tighter corners, the dev team is updating the melee trade logic on the Energy Sword. Prior to this update, if both players are no shields and they melee each other, the player with the Energy Sword will survive with a sliver of health. This patch intends to update the melee logic so both players trade melees and die. This intednds to help prevent the Energy Sword from simply tearing through teams without trading.

Along with introducing a Forge mode in the last update, the upcoming patch ups the ante by adding a new map inspired from previous titles within the franchise. The multiplayer map is inspired by the classic Halo 3 map called The Pit. Titled the Empyrean, the map is now available in Custom Games and various matchmaking playlists. 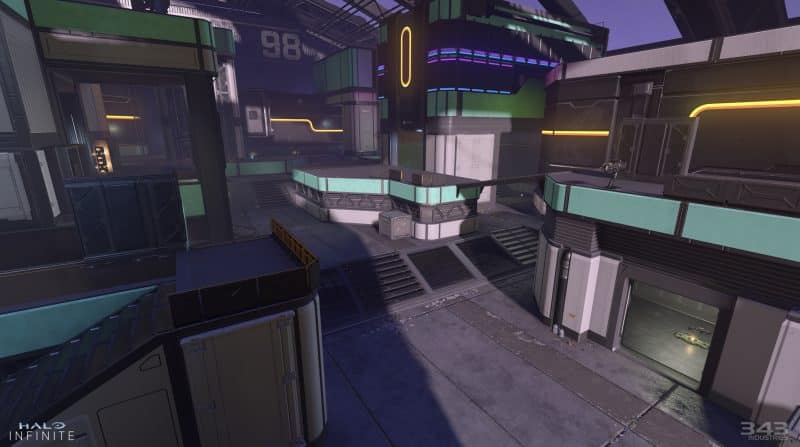 The Halo 3 inspired map was created in Forge with tweaks for the modern Halo Infinite sandbox. The machine gun turrets at each base are now Scrap Cannons and weapon spawns throughout the map now use Weapon Racks like all the other existing multiplayer maps within the game.

To determine which multiplayer playlists include Empyrean, players need to use the steps below to view the map and mode combinations included in each playlist:

This update marks another step in the development team’s ongoing work to address networking and “desync” in Halo Infinite matches. A list of improvements have been made to improve the game’s overall network stability and a smoother in-game experience. Here’s the full list of networking improvements that players may notice during online multiplayer matches:

Another new feature has been implemented with the latest update hat allows players to view their network latency during the game. To enable the in-game Network Statistics counter, players need to navigate to the Gameplay tab of the Settings menu then check the box next to Network Statistics. Enabling this setting displays the current player network latency and status indicators during multiplayer gameplay.

With multiple PC improvements including a toggle to enable and disable HDR mode and more, Halo Infinite’s December update ensures players across all platforms have a smooth experience with the new update content.

With this update, players on PC will now see the aiming reticle on their Heads-Up Display (HUD) turn red when aiming at an enemy in their weapon’s effective range..

The upcoming update deploys a toggle for players to turn on and disable HDR mode on PC. Players will now be able to use a toggle for high-dynamic range (HDR) via the Settings menu on PC. While also allowing players with compatible PC monitors to utilize HDR as expected, this toggle may also improve the experience for players whose laptop or monitor(s) are displaying Halo Infinite incorrectly due to mismatches in other system-level or HDR settings. 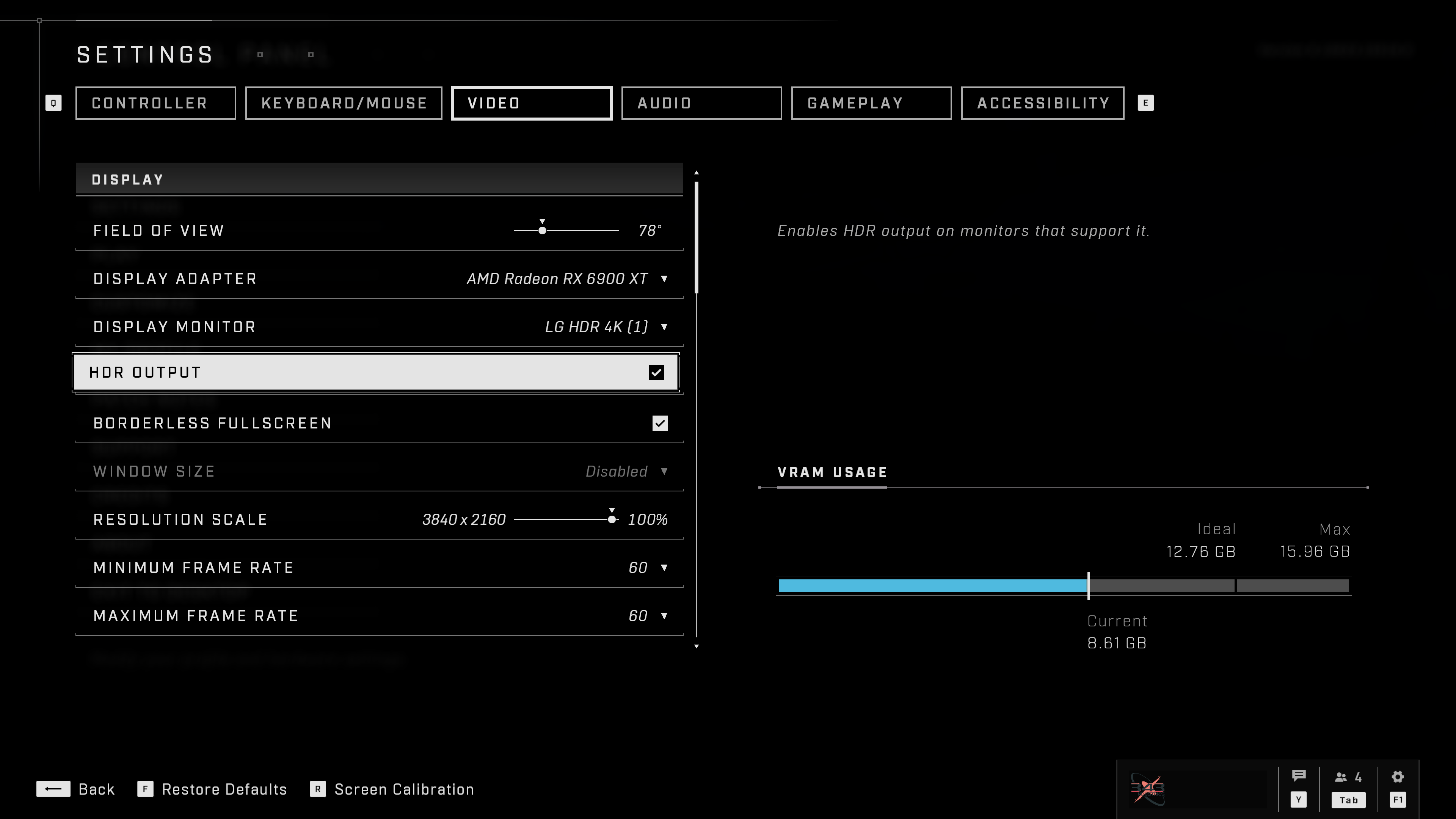 To enable HDR for Halo Infinite on PC, players need the steps below:

To better align with the PC experience, the upcoming update introduces a cursor that becomes available after connecting a keyboard and mouse to an Xbox console running Halo Infinite. As with Halo Infinite on PC, the cursor can be used to navigate various menus, including all menus while editing a map in Forge.

Walk key on Mouse and Keyboard

Before this update, mouse and keyboard players who wanted to move slow enough to avoid detection on enemy Motion Trackers had to crouch walk. With the newly added Walk key binding, players can now slow their upright walking speed without crouching. The accompanying Player Walk Throttle Scale option will also allow players to adjust how slowly they move while walking. Players will be able to choose to hold or toggle walking.

By default, Walk is bound to the Caps Lock key. For players who already had an On Foot function bound to Caps Lock prior to this update, the existing Caps Lock binding will be maintained and Walk will not be bound to a key. 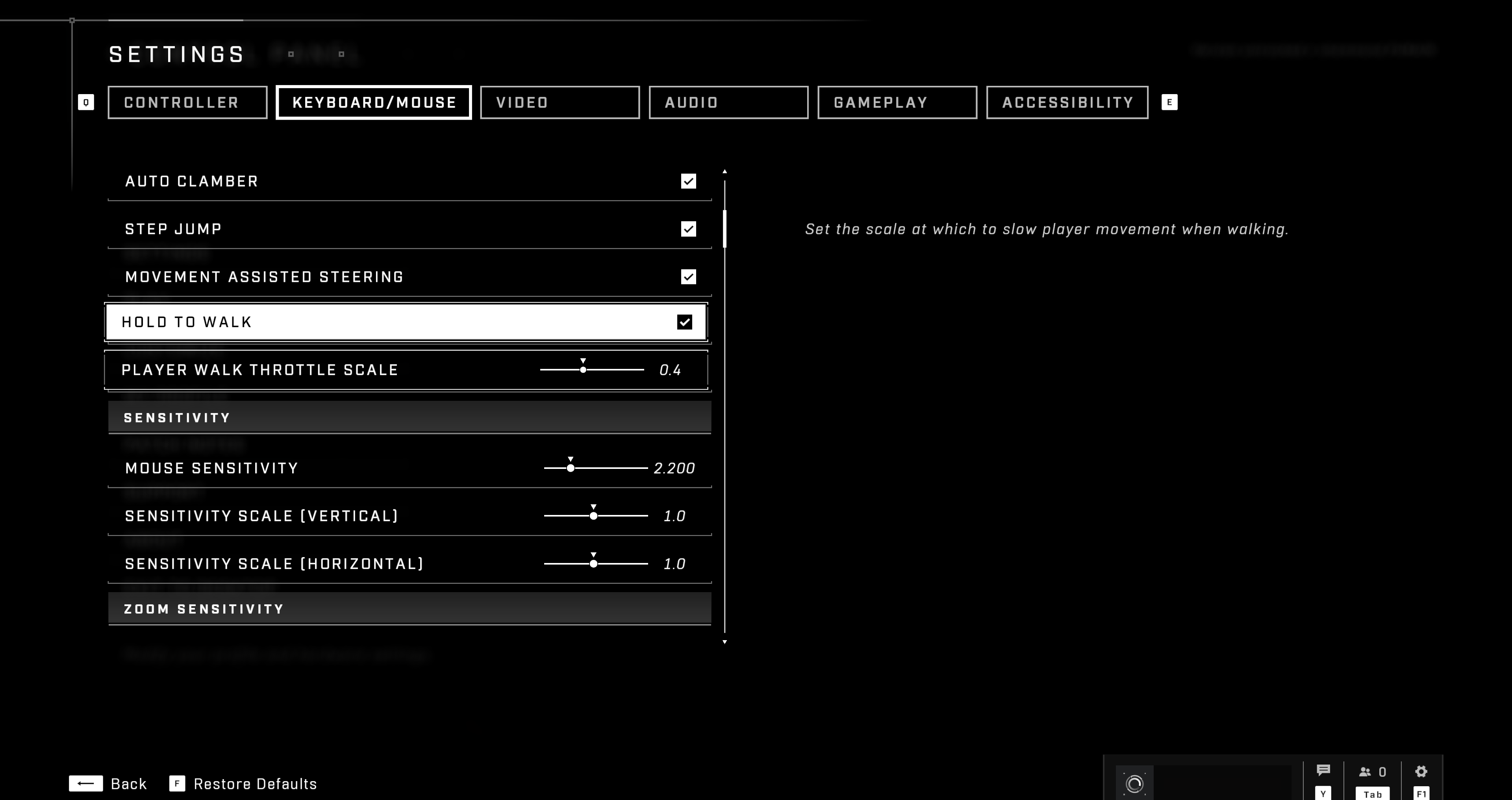 To improve aiming with a mouse, mouse sensitivity has been reduced while firing a weapon in its functional range (indicated by a red reticle).

Developer Notes
We don’t want to move the player’s reticle at all. This improvement to mouse input occurs while having red reticle and actively firing your weapon at an opponent. It essentially slows the sensitivity of the mouse input while targeting enemy players, resulting in a “friction” feeling, which should allow for improved tracking and finer-tuned shooting during sustained engagements.

During gameplay, scrolling the mouse wheel to swap between carried weapons is now less likely to result in swapping back to the original weapon.

To determine if a player is muted or unmuted, open the multiplayer scoreboard and check the white speaker icon to the left of their Gamertag. Muted players will have a diagonal line striking through their speaker icon.

To report another player during a multiplayer match, follow the steps below:

To report a player via the Post-Game Carnage Report (PGCR) by following the steps below:

The patch notes post for the new update addresses a list of issues while suggesting several workarounds to help players manage the current bugs and glitches until a fix is deployed in a future updaye. Here is the full list of ‘known issues’ addressed by 343 Industries in the blog post for their latest Halo patch.

What is the File size of the Halo Infinite December Update?

For more Halo Infinite news and updates, follow us here on ESTNN.

How to manage your tournament registration