Honey, I Joined a Cult

Honey, I Joined a Cult: Rimworld meets Rollercoaster Tycoon, what could go wrong?

I think the title of Honey, I Joined a Cult is a tiny bit misleading. Because this is not a fun adventure in which you join a bizarre cult and uncover various misgivings. No, you are the one founding the cult and entangling more and more people into your well-thought-out web of make-believe for the holiest of all purposes. Profit.

Honey, I Created A Cult

Honey, I Joined A Cult marries two genres that I didn’t think would go together. The Colony Sim is in the vein of titles like Dwarf Fortress and Rimworld and the Tycoon/Management Sim like Rollercoaster Tycoon, Zoo Tycoon, and so on.

So, not only do you have to keep all your cult members happy and tend to their every need. You also have to balance it by being a for-profit made-up religion that offers therapy and guidance to the people of the town you descended upon.

It’s very clear that Honey, I Joined A Cult doesn’t take itself seriously. At all. (You can tell from the little intro cinematic in which your future cult leader decides, after running one cult he/she might just run another for the joy of it and more importantly, profit.) There are tons of options to customize your cult to your liking — you can go for something more radical like worshipping your favorite Marvel character to just praying to the Great Serpent of Ronka.

For reasons, I decided to run my Cult as the Hulkamaniacs, brother. Led by the not-controversial, totally not questionable former WWF champion, Hulk Hogan. We worshiped that WWF Championship title and prayed to the larger spirit of Hulkamania, brother. My fellow Hulkamaniacs sported beautiful red bandanas, that would hide any receding hairline. And they were quick to follow my any order.

While gameplay-wise, you do little more than change the terminology and aesthetics of your cult. I think it already offers a lot of replay value from the get-go. Because it encourages something many Colony Sims fails to do, role play. What I mean by that is many players of titles like this will quickly fall into the same strategies, Doing the things that work best and stifling their creativity.

And the game’s later focus just turns into making the most memorable screenshots possible to share with your friends. And it’s funny if you put in the hours. By the end of my playthrough, I managed to create a perfect cult of personality that worshiped the divine being known as Hulk Hogan. Complete with a bunch of golden statues of the Hulkster all around the compound… while my followers lived in the poorest of living conditions.

So the way you play the game is not by just collecting resources and researching more elaborate tech. Well, actually that’s exactly what you do but it works a little differently here. You only care about one resource, money. And as we all know, you make more money when you reinvest it into yourself. So your cult does what any cult does, I think. Offer spiritual guidance and more and more elaborate make-believe therapy to reach enlightenment.

This goes from something as harmless as group meditation and regularly held pep talks, to more out-there therapy —like bathing in a tub full of maggots— to full-on ritual sacrifice. Seeing how bizarre things can get is one of the things I’d consider the title’s standout features.

You need to offer a variety of activities to please your followers, these activities are being managed by cultists who you can and should train specifically for that task. I should probably explain this, followers are your customers so to speak. They come in on the daily and want to experience the presence in exchange for cold hard cash. Cultists, on the other hand, are your employees. You have to care for their needs like making sure they have a place to sleep, a place to eat, and most importantly a place to worship you.

If you want to run a smooth operation, you’ll of course have to keep an eye on your cultists. Most of them come with personality quirks that’ll spice things up. Some don’t want to sleep alone, others prefer to work the night shift and some tend to just incite chaos. If you’ve played something like Rimworld you’ll probably want to circle these out as quickly as possible.

For that, you can just kick them out and recruit one of your followers. The more infamous your cult grows, the more talented people it attracts; with increased level caps and more money to spend. Oh yes, they come with level caps. Your cultist ranks should be filled with only the most talented of people, but on the way there, you’ll have to make some compromises. Let’s be real though, it is much more interesting when you have a few bad ones in between.

Many People Make a Cult

My real complaint about the game comes with the cultists themselves. You’re encouraged to get rid of the ones with the lower-level caps pretty early on. The same goes for your followers. As I mentioned before, having more out-there personalities in your cult makes a playthrough much more enjoyable. The only problem is, the better your cultists are the less interesting problems you’ll eventually run into.

I would’ve much preferred if your early cultists and followers have fewer quirks you have to juggle around, vs the later, more skillful people being way more of a loose canon and having some kind of risk-reward thing going on. Also, cycling your cultists in and out kind of makes the missions (which we’ll talk about in a little bit) seem a bit useless early on. In the end, these feel a bit wasted, since the rewards aren’t exactly worth the risk outside of leveling up cultist you’ll want to get rid of anyways. 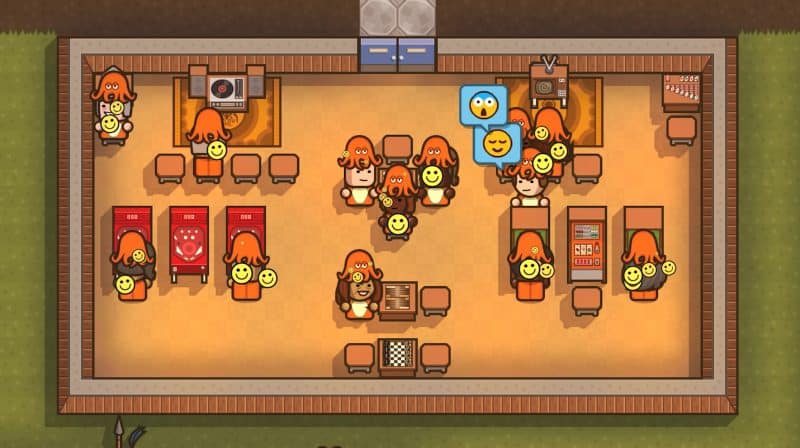 When leading a cult, you’ll, of course, need good PR. For that, you can send your loyal cultists out on missions to drum up support for your super cool new religion. But that’ll generate heat, which is a value that shows how much the jealous population of the town doesn’t like you. Generate too much heat and the police will roll up and shut you down. Or you’ll occasionally have to deal with pesky protesters demanding to know why all the cats have disappeared and all of your members are wearing weird-looking fur coats.

Having a protest around will just create more issues, you know. People will have a hard time meditating and thinking about how to worship you when someone keeps yelling at them it’s a bad idea. For that, you’ll have to send out some of your trusty cultists to solve the situation. Different skill sets solve different issues, of course.

As you research more and more options, you can eventually send your cultists out on covert operations and tweak the various values you’ve been generating. On paper, this sounds and is really useful to train your cultists super fast. But the rewards outside of that don’t really seem to be worth it. Especially in the early game, when sending out a cultist can mean you’ll be losing out on a lot of profit.

But to their credit, these missions will occasionally trigger little events in the style of a text adventure. Here you’ll have to solve a bizarre situation — like being asked to give a guy 500 dollars so he can access the money from his Nigerian rich uncle. Rule of thumb here, don’t think logically about these. I found going with it and being as out there as possible works best.

7/10 Nothing Special but Fun

I don’t think Honey, I Joined A Cult had any aspirations to come even close to the depths of gameplay its contemporaries offer. But comparing games directly to each other is a bit boring. Instead, Honey, I Joined A Cult executes very well on its fantasy. The gameplay is not as deep as I’d like it to be personally, but it is enough to keep you entertained for quite a while. If you want a more laid-back approach to the colony sim with quirky humor and an off-beat tone, I think you’ll get your money’s worth out of it.

But I also highly encourage you to commit to more of their ideas while playing. These kinds of games can get really samey and by the numbers, if you try to play as optimally as possible. You need to try and have fun with it, so make that cult worshipping the console of your choice or pineapple on pizza.

If you want to catch up on more reviews and the latest in gaming and esports news, check us out here at ESTNN.

FTX and their links to blockchain gaming