The Inquisitor’s Suppressed SMG is the brand new Mythic weapon in Fortnite, find out how to get it!

Fortnite has brought some cool content into the game with the Fortnitemares update like zombies and a new werewolf transformation. It’s also added a new boss and Mythic. While it’s a bit more buried in the patch notes, a Mythic Inquisitor’s Suppressed SMG has hit the game. This brings a high-level version of one of the top weapons in Fortnite Chapter 3 Season 4 into the title.

This weapon has been brought in with a new boss. However, it is a boss that Epic has been a bit more secretive about than other new features in the season. It isn’t in their patch notes. They’re not making it entirely clear how to get the Inquisitor’s Suppressed SMG. There’s currently a single quest to contribute to taking her down. however, not much detail from Epic on how you can the gun.

This guide is going to cover how you can get the Inquisitor’s Suppressed SMG, and how its stats compare to the base gun and other SMGs kicking around Fortnite at the moment:

Where to Get the Inquisitor’s Suppressed SMG

The Inquisitor’s Suppressed SMG works like most Mythic weapons in Fortnite. There’s only one of them in the game at any time (outside of tents, where you can store loads of Mythics if you). You get it by taking down the boss who holds it, the Inquisitor. This fight isn’t as bad as some others from Chapter 3. However, the locale definitely puts it on the trickier side of things. Compared to Chapter 2, the difficulty has been ramped up.

You can get the weapon from the boss at Grim Gables. This Halloween-themed POI has some new additions in the latest update and you can now find the inquisitor and the weapon there. Although, she isn’t in the game from spawn. You’ll need to go through a bit of a process to get the Inquisitor’s Suppressed SMG.

How to Get the Inquisitor’s Suppressed SMG

The first step. It’s simple enough to get here but there are a couple of things to keep in mind. The Inquisitor fight can be difficult. So is dealing with the masses of other players after this new high-level gun.

Ideally, you should take care of enemy players before the boss. Although, lying in wait and ambushing another player attempting to take her down can work well too. Third partying is a tried-and-true tactic in pubs, it works for the boss too.

That aside, once you’re at Grim Gables you’re ready to summon the boss and get the Inquisitor’s Suppressed SMG. 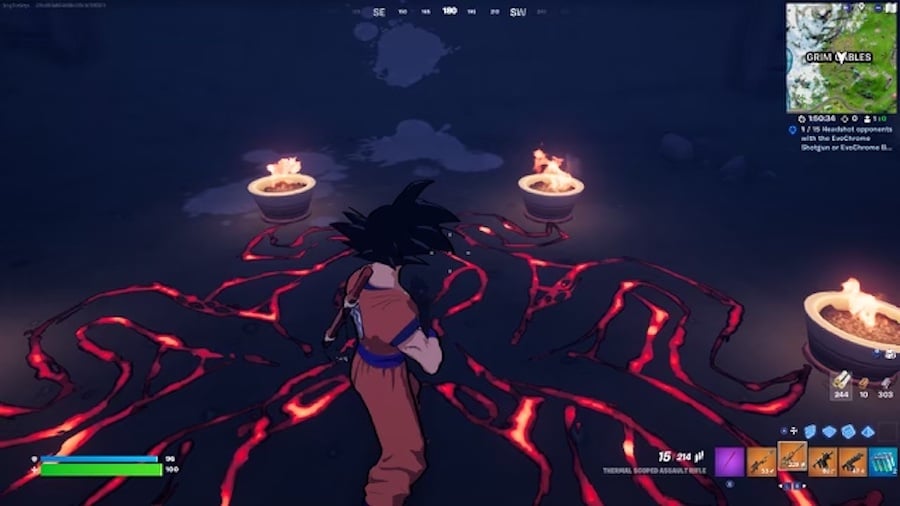 To find the Boss, you’ll need to head to a specific area of the manor. Enter the building through the door by the bounty board. Under the stairs, you’ll see a hole in the floor. Descend down into the mine shaft and you’ll eventually reach the bottom. This is where the boss is.

How to Summon the Boss

This is Halloween, and with Altars around and rituals even fighting a tough boss isn’t as simple as it has been in other seasons! To get the Inquisitor’s suppressed SMG, you’ll need to pull off a ritual and summon them into the game.

In the basement’s central area, you’ll see a spot with candles around it. It doesn’t quite have a pentagon like in horror films, because even though it is Halloween this is still Fortnite. However, the spot is pretty hard to miss. You can see numerous candles around a central area with markings.

This spot is where you need to do the ritual. Walk into this area. As you stay in the centre, the lights around you will slowly light. Once they’re all lit, the boss will start to spawn in. If you leave the area before it’s complete, you’ll have to start over.

Much like the werewolf ritual, this is tricky. It takes just long enough for you to get eliminated. That’s why it is kind of important to deal with anyone contesting your drop before you summon the boss.

Taking Out the Inquisitor

To get the Inquisitor’s Suppressed SMG, you’ll need to take out the boss themselves. The Inquisitor doesn’t have the most health like Chapter 3’s other bosses. However, the environment itself causes some problems compared to others. It’s an enclosed space. As soon as you summon the boss, you’ll need to put some distance between you if you don’t want to be on the receiving end of that SMG along with their other weapons.

The Inquisitor will make use of quite a few explosives. That’s along with regular guns. The normal strategies for Fortnite NPCs apply, just evade a bit and avoid more difficult attacks.

The best way to fight her is to keep space between you and try to gradually chip away at their health.

One thing to watch out for is explosives. The boss uses firefly jars which can whittle the space around you down even more. They can also use the rocket launcher which can hurt at the close range. If you’re playing Solos, take your time a bit and try to pump out enough damage to eventually take her down. Rely on cover.

If you take too long, the boss might leave the basement. They’ll stay in the general area, but you’ll likely have to fight off zombies too in this situation. This method does give you more cover and space. However, the zombies are an irritating additional foe.

How to Get the Inquisitor’s Suppressed SMG

Once you’ve taken out the boss, they’ll drop the SMG which you’re free to pick up! That’s how to get the Inquisitor’s Suppressed SMG in Fortnite. This gun is really high-level, so you’ve got a completive battle ahead of you if you want to grab the gun. These are its stats:

These stats are great compared to most rarities of the normal weapon. This is going to deal insane damage on a headshot. At 42 damage for a headshot and 30 shots in a round, the Mythic SMG is definitely going to get it done.

With there only being one of these OP guns in the game, getting the Inquisitor’s Suppressed SMG is going to give you a real advantage in the game. How to get it can be a bit tricky. You’ll have to face a gauntlet of other players and the Inquisitor herself. However, the prize is definitely worth it. It might be helpful to grab some loot from somewhere nearby, then use the airships or deployable launchers to get over to the mansion itself.

Whatever strategy you use, you’re in a good position to grab a Victory Royale once you find this new Mythic.