New Overwatch 2 Hero Looks have added a whole host of new looks for Overwatch 1 characters. To see who’s had the biggest changes, check out below.

There are more unlockable skins and even a Battle Pass of fresh looks. You’ll need to grind a lot of weekly challenges and more to actually get them, though. Although, the new base Overwatch 2 heroes have some key differences too.

Most players probably aren’t grabbing every skin anymore with the new prices. You might be going for those at the top of the Overwatch 2-tier list or your main. More and more, though, players are stuck with the base skin for some characters. That does still leave you with a choice, though. This game has two distinct default or standard tier skins now, Overwatch 1 and the new Overwatch 2 redesigns.

Not every Hero has had a significant redesign. The vast majority of the game’s cast has gotten a refresh, though, from a new style through to some changes in their color. Some have significant changes. Other more minor changes, like getting a new hat. However, in all, the Overwatch 2 new hero looks are a fun, fresh addition to the game’s design.

Not every character has had huge changes. However, when compared directly to the other changes, you can see that most have been altered outside of a few key omissions.

These are all of the new looks. We’ll put them next to the original so that you can spot even the more subtle changes in the game:

Ana’s redesign is a subtler one, mainly changing up the colors of her outfit. She’s got some more colorful clothes with a stronger blue feel to her coat. She’s also had her underneath armor changed around quite a bit too. 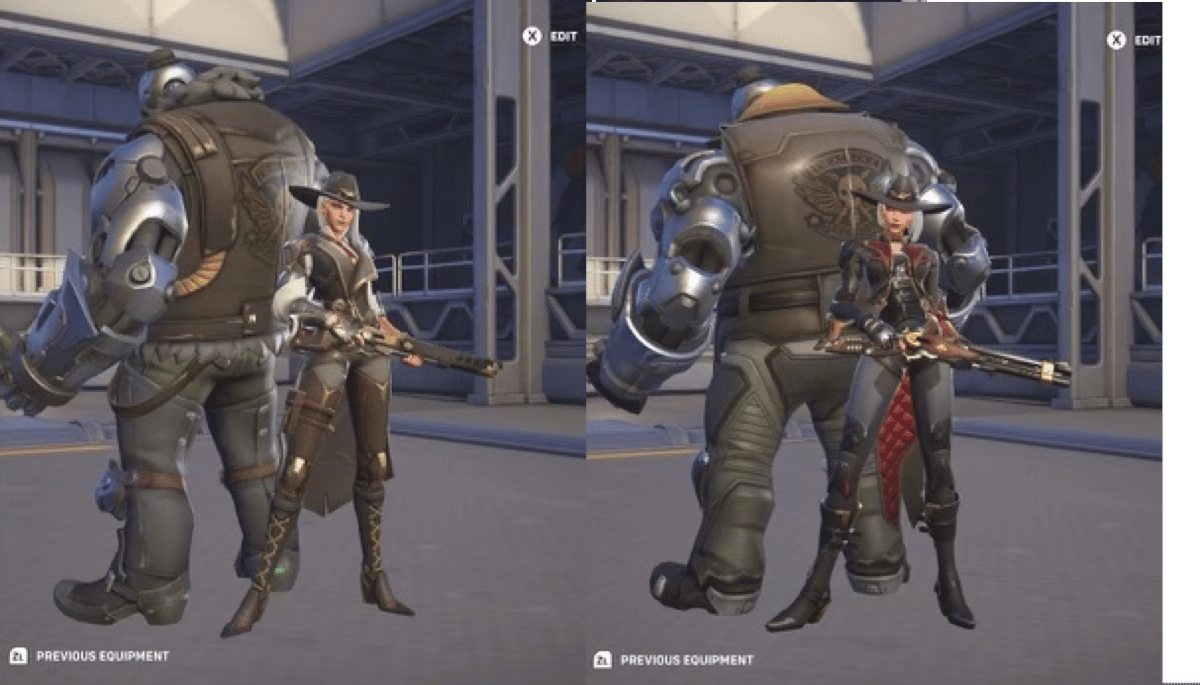 Ashe’s change is one of the less noticeable out of all new Overwatch 2 hero designs. This one changes the armor around a bit, along with changing the colors of Ashe’s clothes. This is more of a tweak rather than a new look. 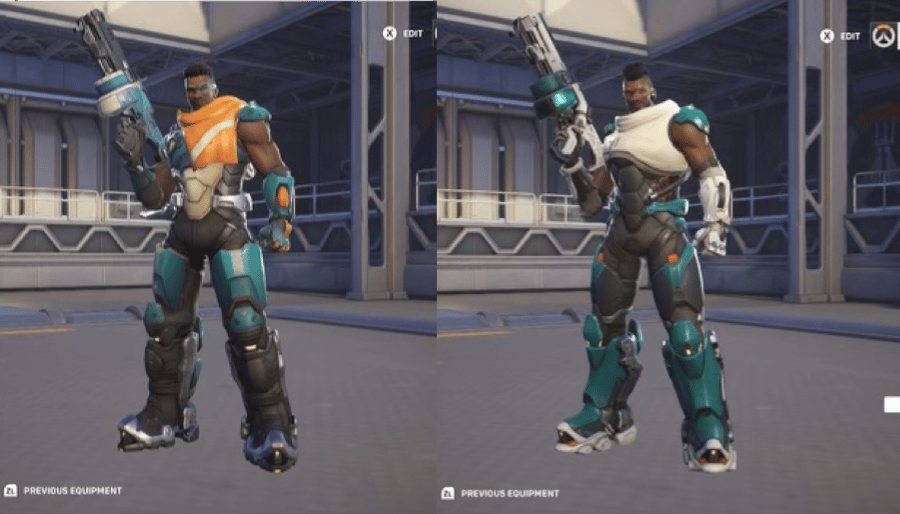 Baptiste has had a decent change with the new release. He’s got a different-colored scarf! He’s also got some changes to how his armor is colored and a differently stylized face and haircut. This isn’t going to alter how he looks dramatically, but he’s got a bit more going on than in the previous game. 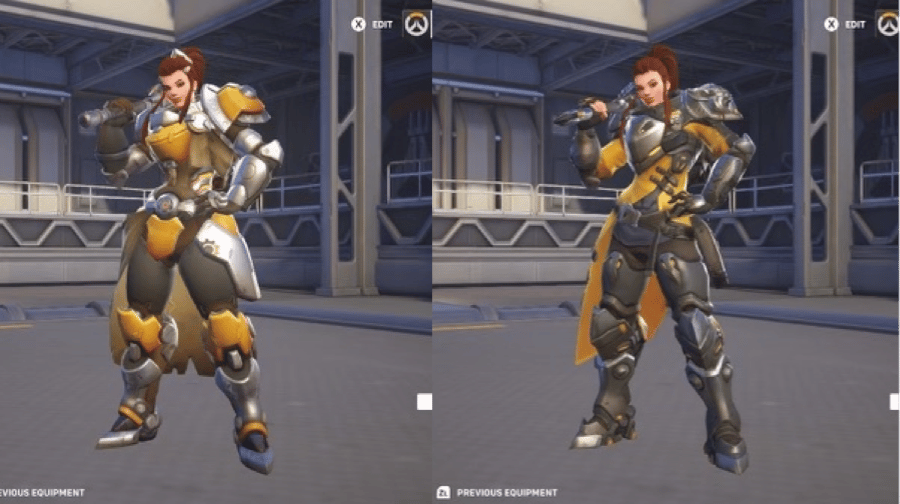 Brigitte slots into one of the more subtle redesigns in Overwatch 2. Like a lot of heroes, she’s been given a different coloring for her armor to make it look more functional. Her hair also looks a bit different. Along with the colors getting swapped around for parts of her armor. 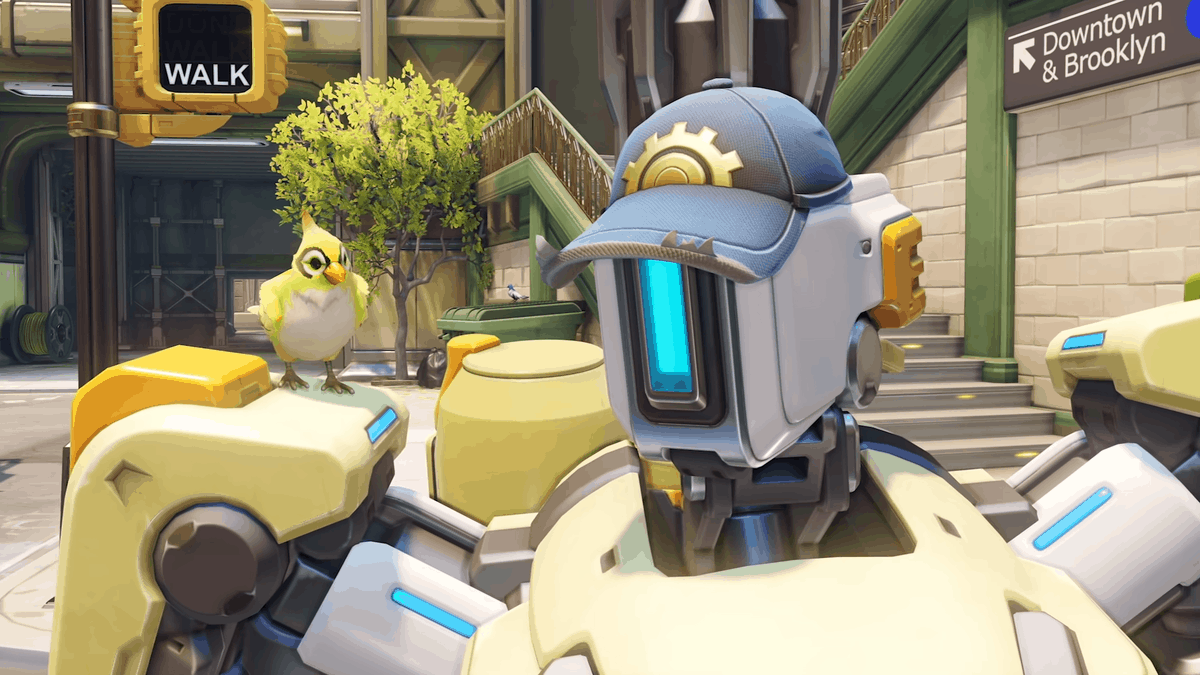 Bastion’s Change in overwatch 2 is on the more pronounced side. The robot has a new hat! He’s also had a coat of paint applied. He’s now brighter colored. Although, the cool hat is probably the biggest pull of the redesigned Bastion. 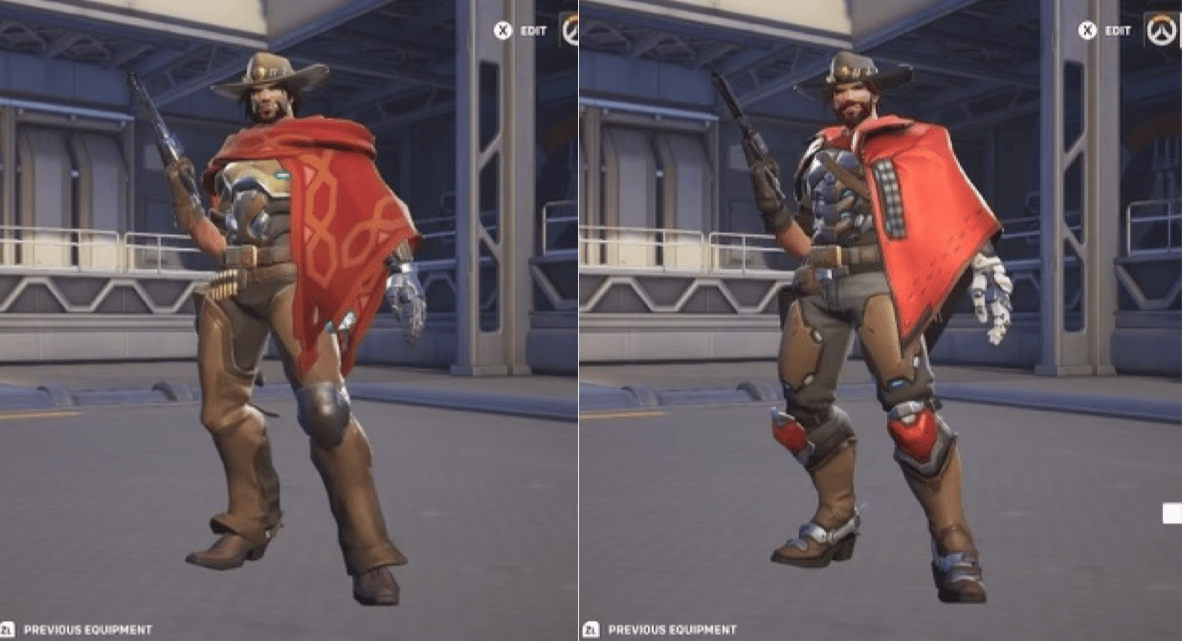 Cassidy has had a big redesign with the new game. That’s alongside his name change from McCree to Cassidy a little while ago and the change to his abilities, as you’ll see in a Cassidy Overwatch 2 guide. The main changes have been to his outfit, giving him more armor and robotic-looking parts. He’s also had a bit of a revamp to his clothes too, including a new scarf. 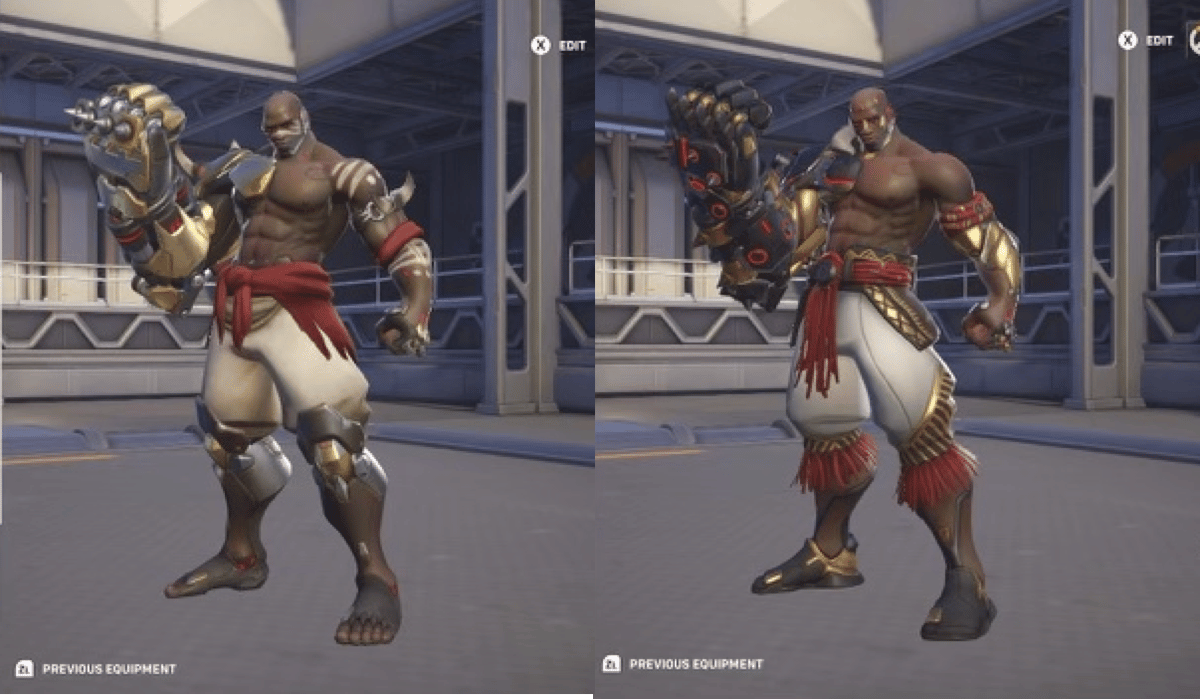 The new Overwatch hero look and design for Doomfist are pretty basic. He’s got a different color for all of his armor and some minor changes to the fabric around him, too, along with new shoes. 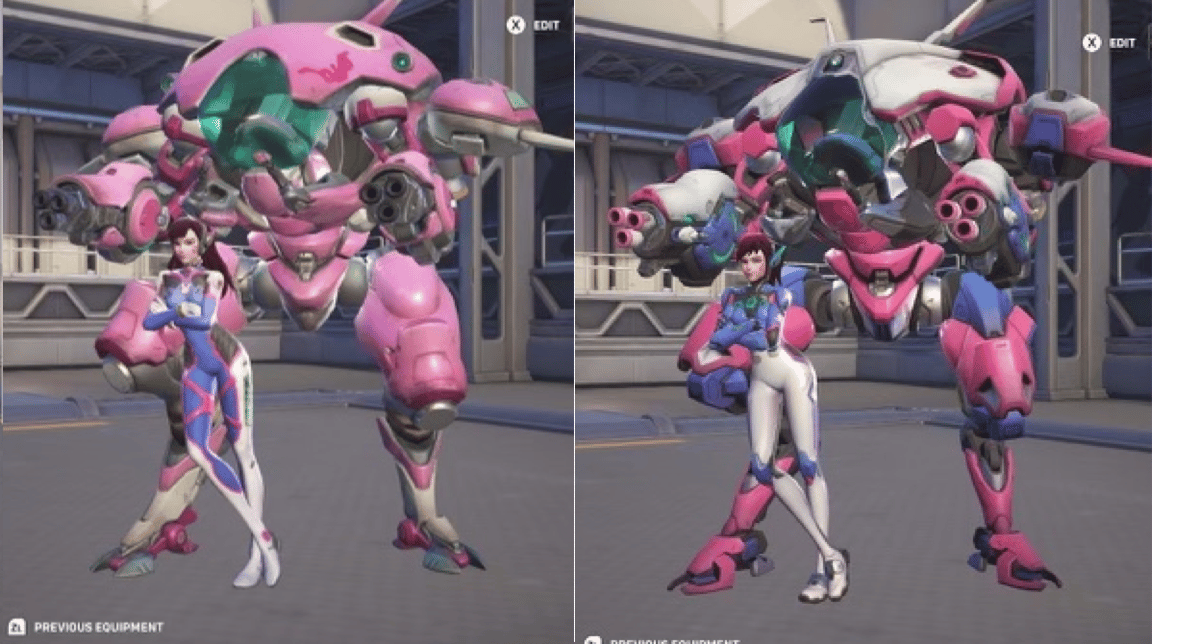 D.Va has had some of the fewest changes from game to game. It’s difficult to look at her overwatch 2 redesign and pinpoint why it has a separate skin slot. The mech and her suit have had some minor color changes. It feels more like just switching around colors than really going for something new, though. 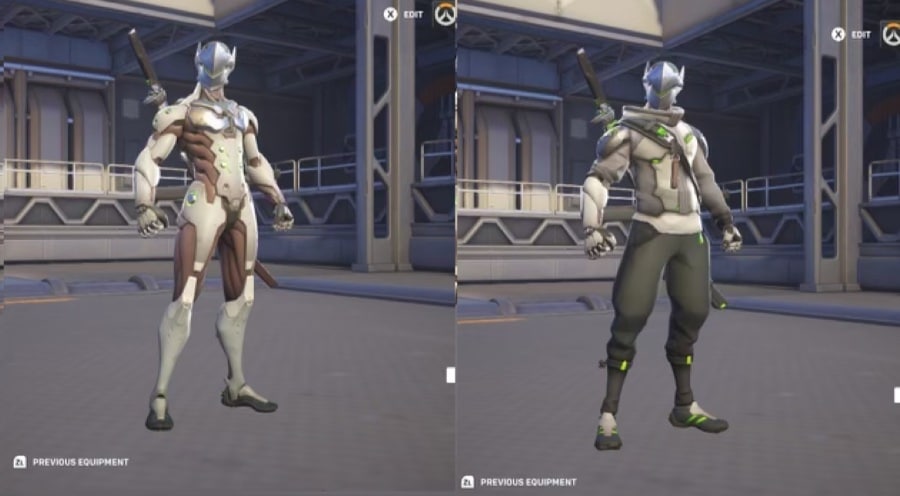 Genji has gotten a full revamp with Overwatch 2. He’s not wearing trousers or a jacket, and his mechanical parts are now pretty well hidden. This is a pretty different look from the Super Sentai-style outfit he had previously. 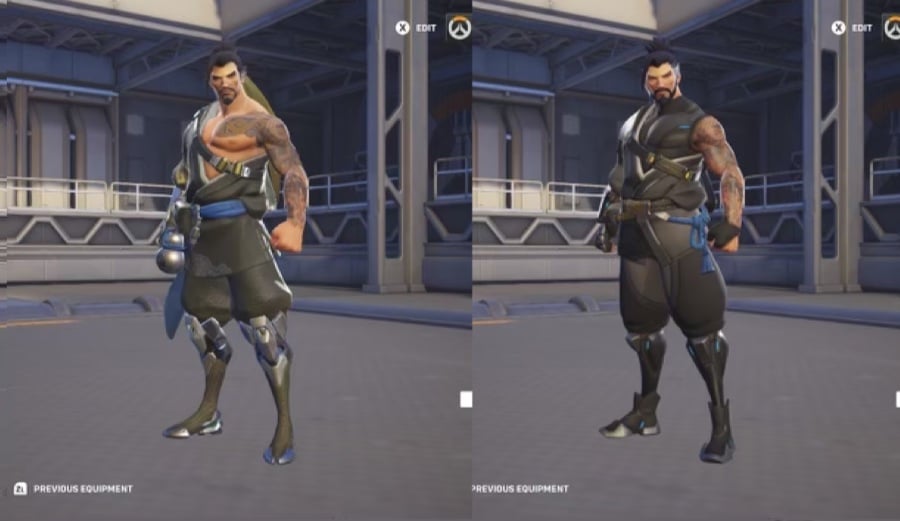 The new Overwatch 2 hero looks for Hanzo is pretty different. He’s got a shirt on! He’s also got a slightly different design over his face and hair. That’s along with a different color scheme. Hanzo is covered up quite a bit more; it’s up to you if that’s an up or downgrade though. 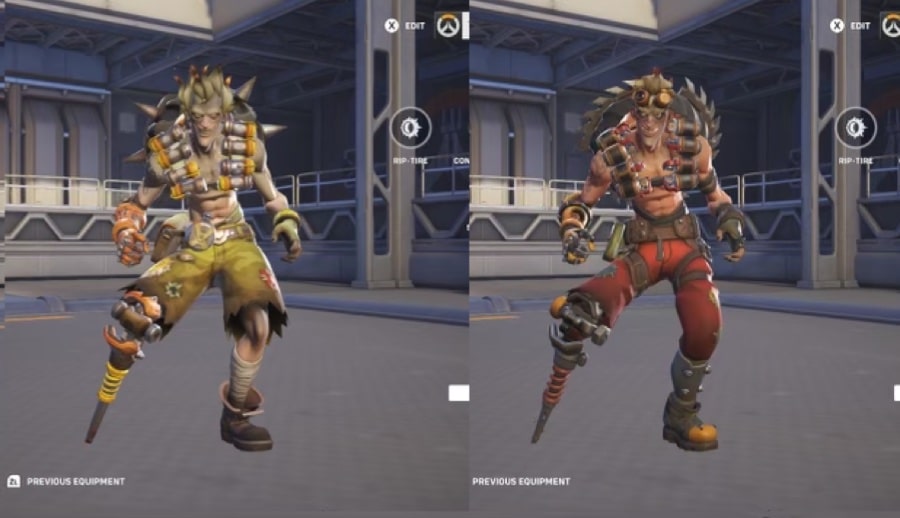 Junkrat seems to have calmed down in Overwatch 2. He looks less frantic, but still with that same edge. He’s got different. colored clothes, different goggles, and alterations to how color scheme to reflect the overall palette change in the game.

In Overwatch 2, Lucio has had some minor developments. He now has more green in his armour and the lower half of his body has changed quite a bit. This one of the new Overwatch 2 hero looks also comes with a different color for his hair.

Like a lot of the overwatch 2 redesigns, this one feels more like fiddling with his design than really changing him up. 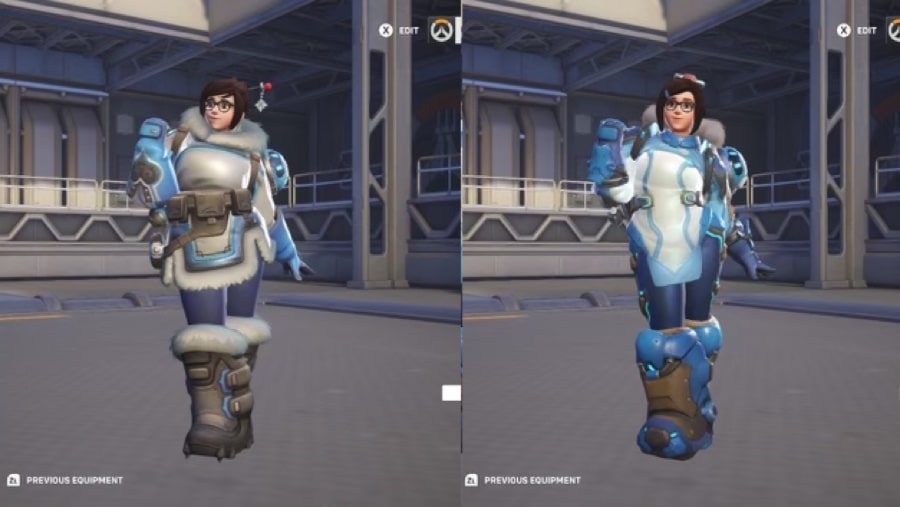 Mei has had a big change to her overall design with some fresh clothes. Her coat and boots are now less furry, and her overall look seems more functional than previously. 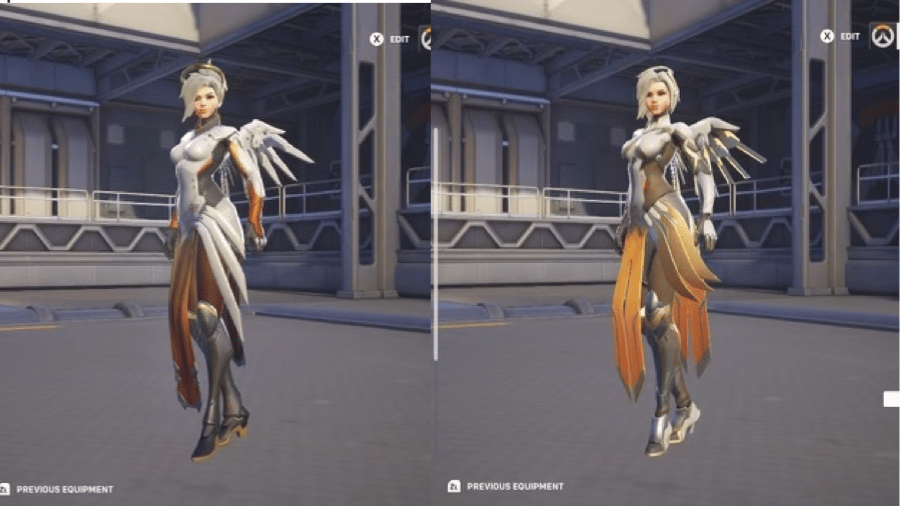 Mercy has changed her hair color, armor color, and a general redesign for the accents of her outfit. 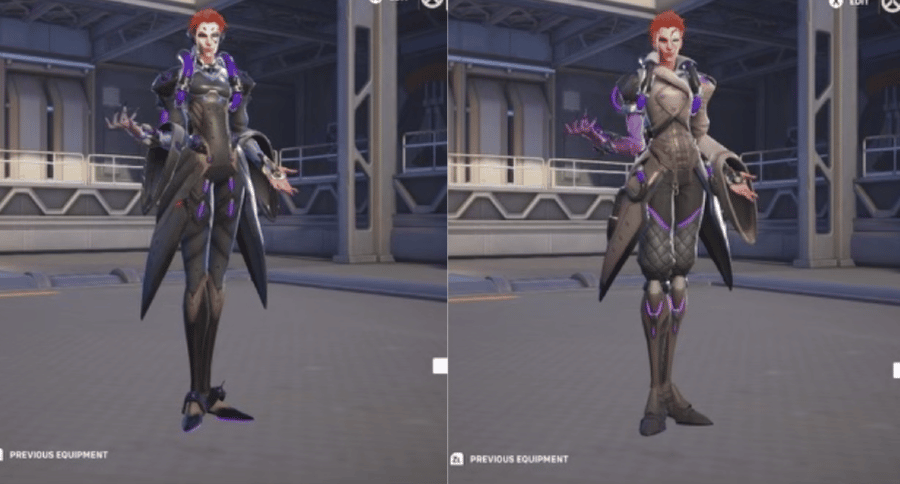 Moira’s one of the new Overwatch 2 hero designs isn’t a huge change. She’s mainly just got a new color scheme. Although, there are some slight alterations to her general look like one of her sleeves. 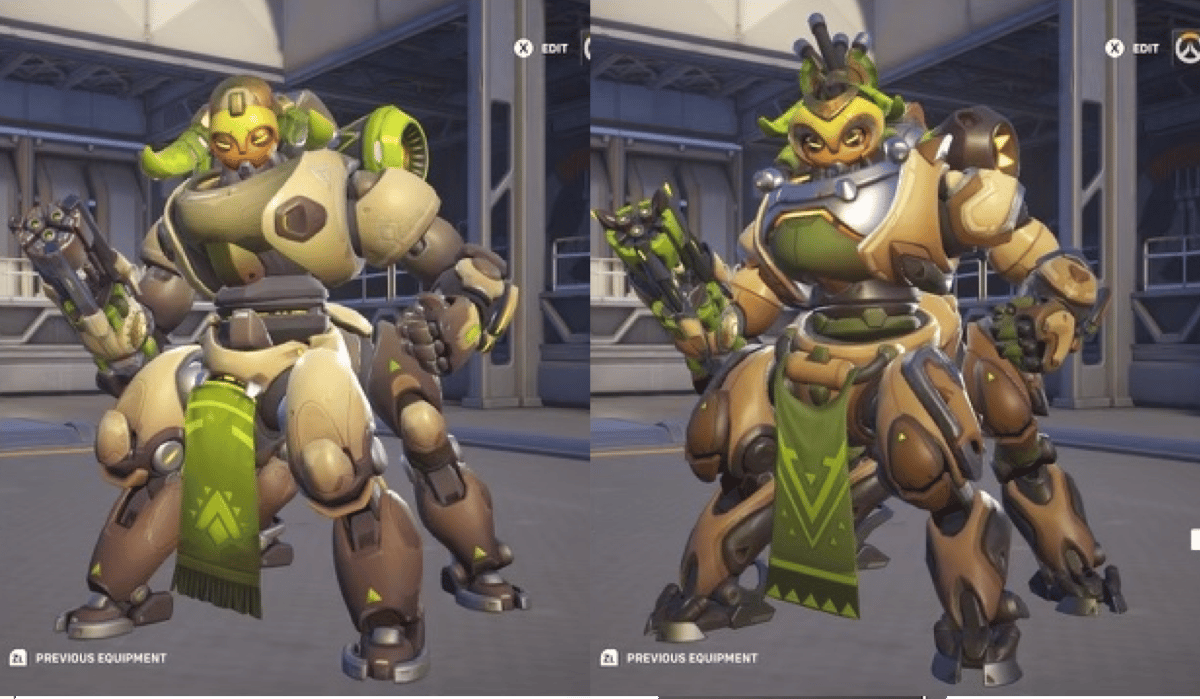 Orisa has had a redesign that adds more color to her, along with changing around the head. 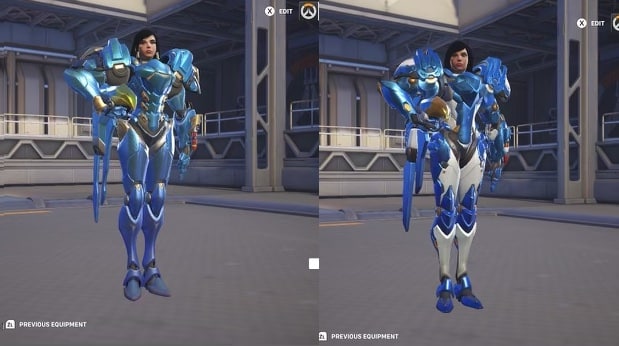 Pharah is on the lower end of all new looks in Overwatch 2. Her armor has had some color changes and slight alterations to the details of her design. It isn’t a full revamp, but she looks fresher. 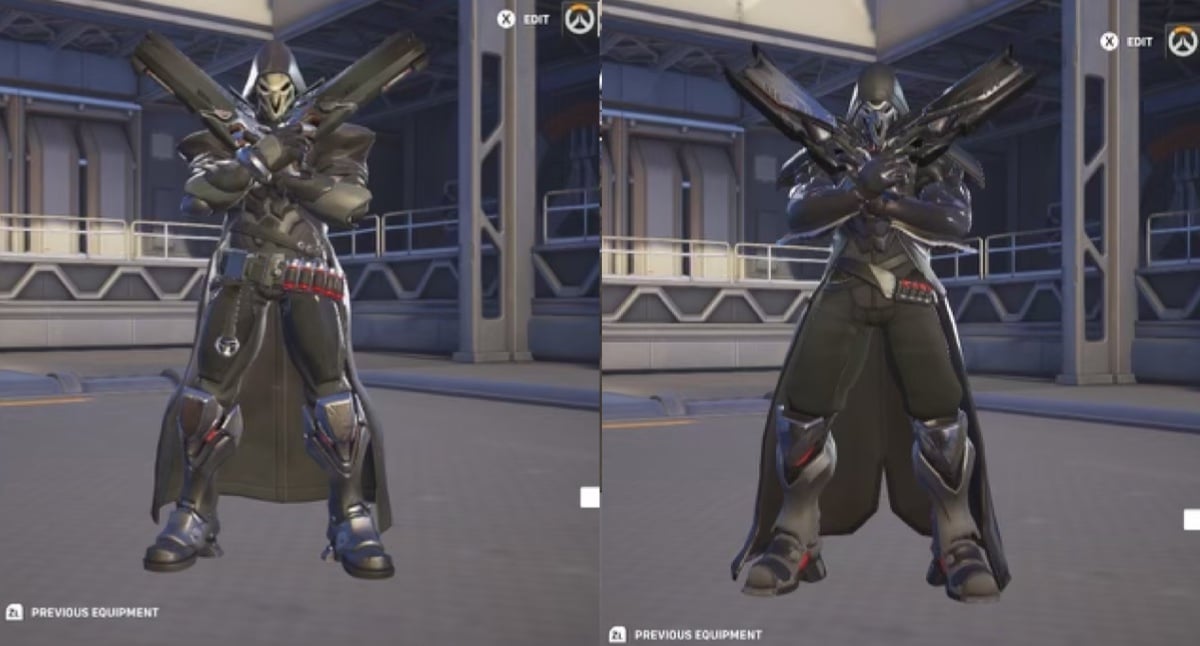 Reaper remains edgy, but his outfit has had some more minor changes. His color scheme is a bit different. That’s alongside his shotgun shells being more normal-sized now. 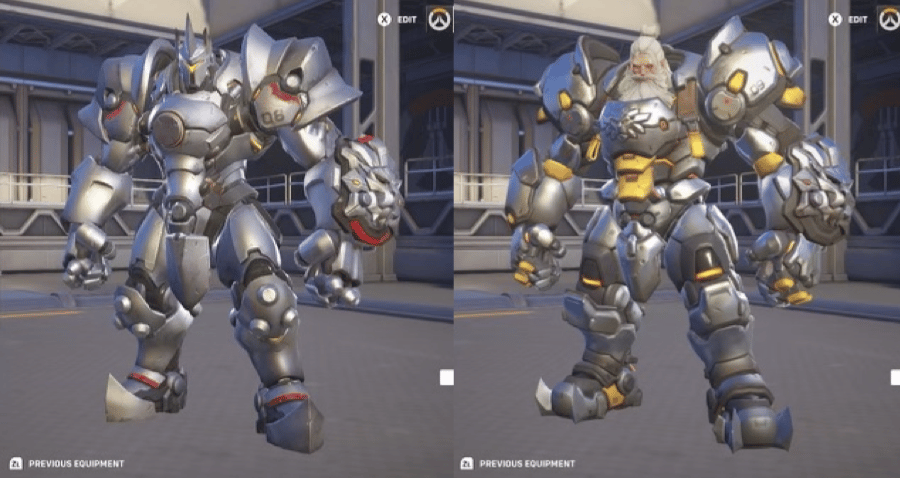 Reinhardt’s color scheme has changed from red and grey to gold and grey. He also has a lion motif on his chest and slightly different boots. The face reveal isn’t new. It has been a part of some other skins in the past. Although, now base Reinhardt has his mask off. Roadhog has had a change to his mask and a redesign to his trousers and armor. Like a few other characters, his outfit looks more functional than it used to be with the new Overwatch 2 hero designs. 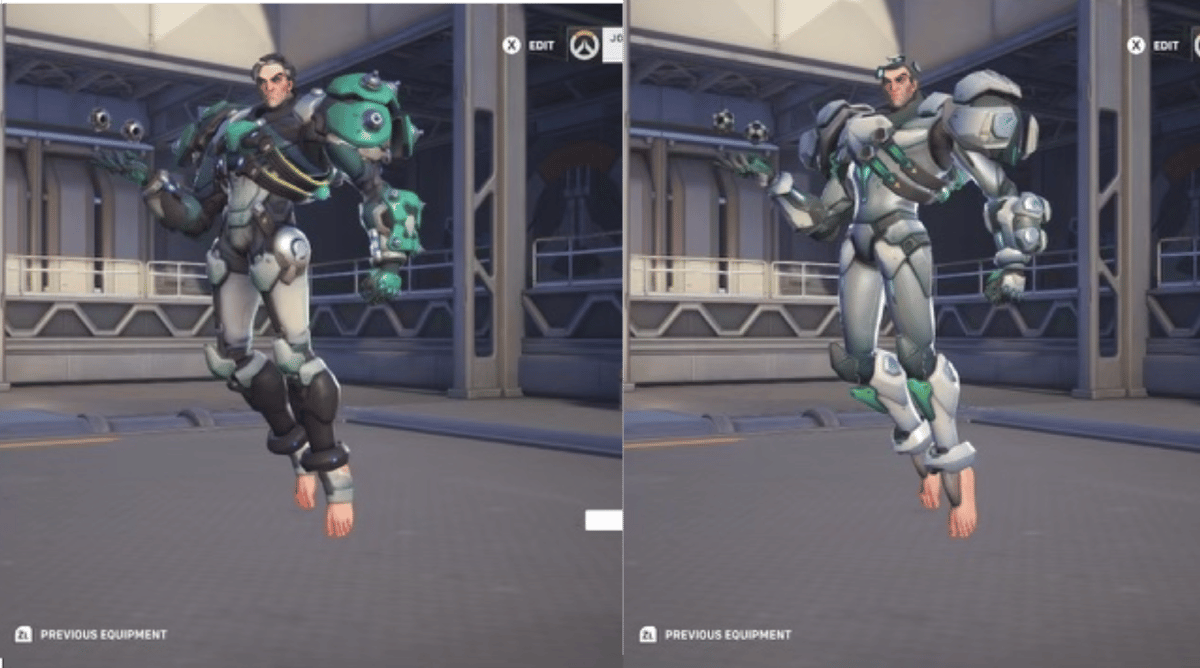 There have been plenty of changes to Overwatch 2 heroes, but Sigma still has no shoes. He has had his armor colors changed and lightened up, though. 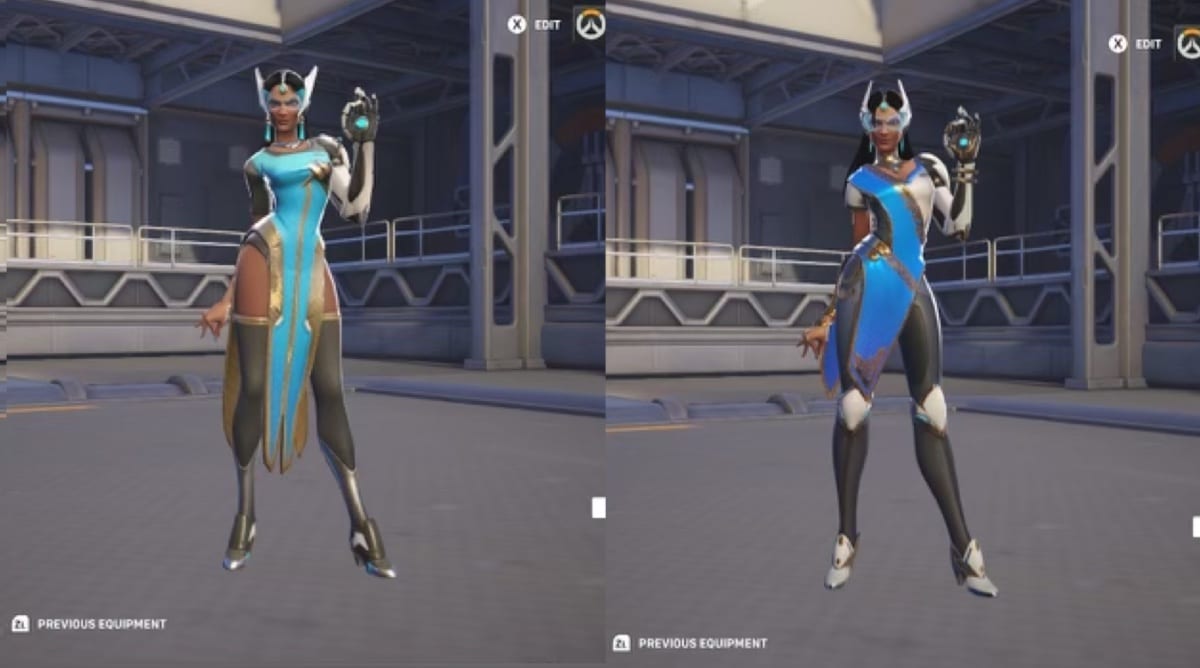 Symmetra’s changes fit with the general design ethos of Overwatch 2. She’s got more functional clothing now, including some armor. This isn’t the biggest of the Overwatch 2 new hero redesigns but it’s a change that makes sense. 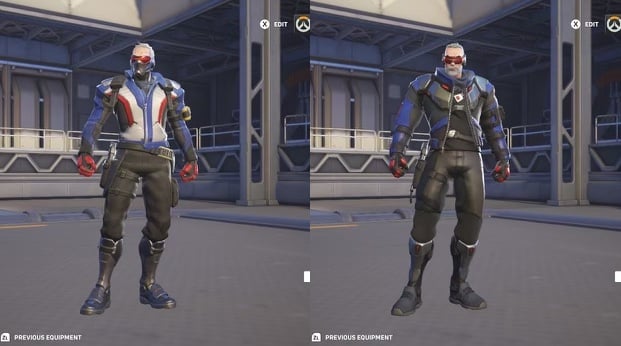 Soldier 76 has received some new clothes and a slightly different color scheme. He hasn’t changed too much though. 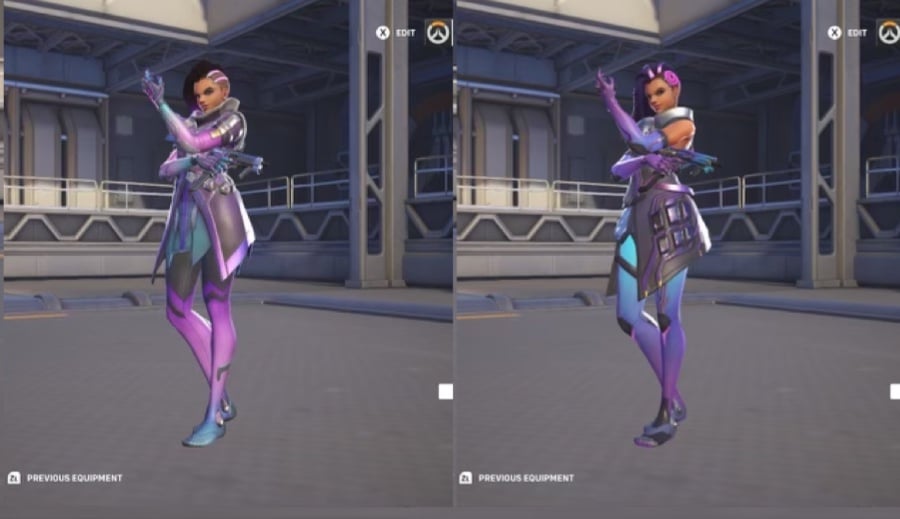 Sombra’s Overwatch 2 redesign has changed the color scheme for her, alongside the general design of her clothes. While she still has a similar silhouette, she’s changed around quite a bit. 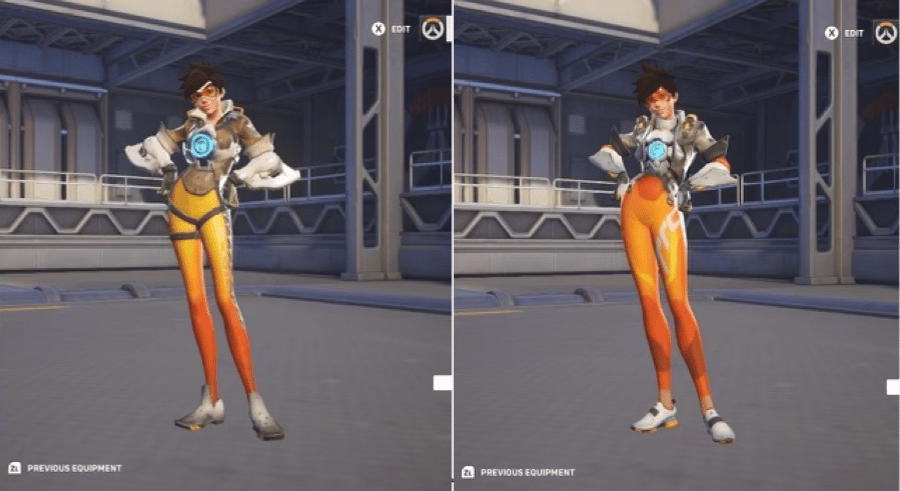 Tracer’s design has been slimmed down in Overwatch 2. She also has different colors on her outfit with the new Overwatch 2 hero looks. 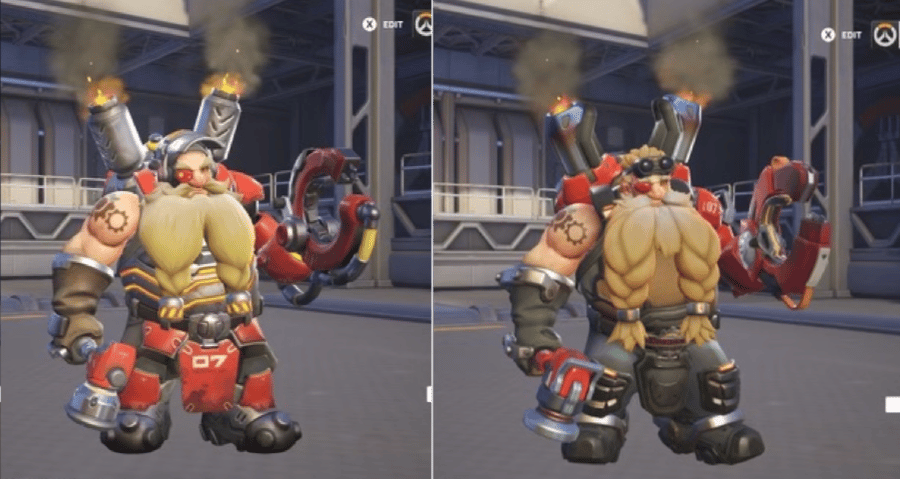 Torbjorn weirdly looks quite a bit younger than in the first game! He now has a different color beard and his armor is altered. 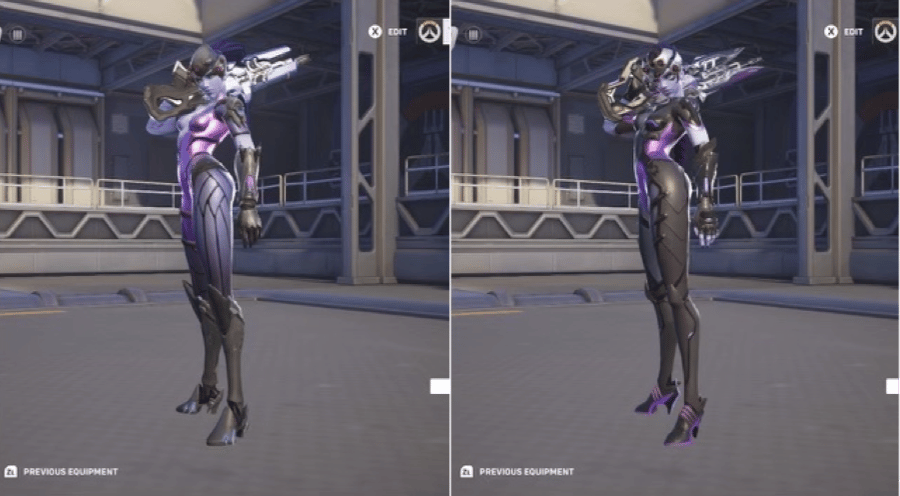 Widowmaker’s gotten a new set of armor in Overwatch 2. The outer layer now matches her boots in color. Her headpiece has also been made lighter. It’s a more minor change, but in keeping with the way most of all Overwatch 2 new looks have gone, more functional. 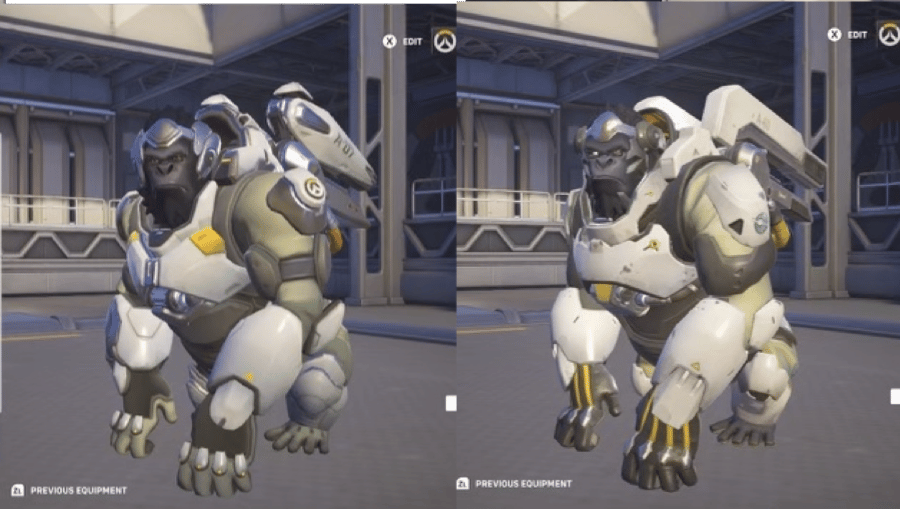 Winston has a new design for his armor and a color scheme that matches more across his whole armor. 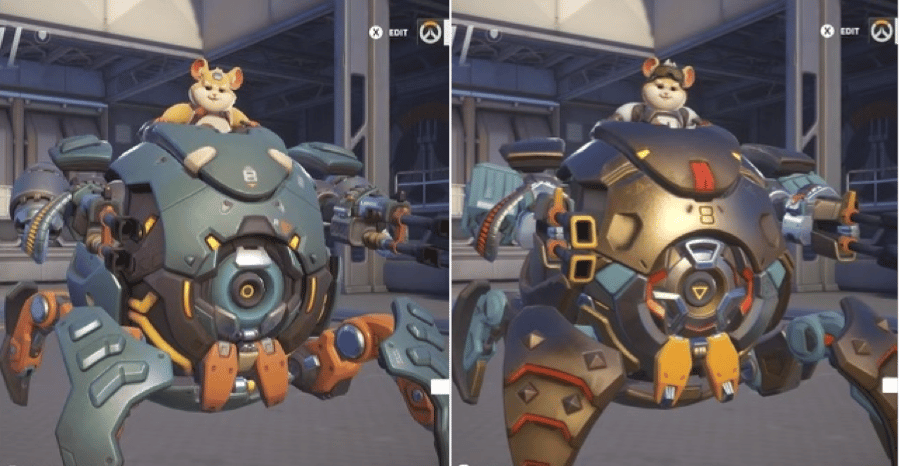 Wrecking Ball’s changes include a different coat of paint for his mech, along with some new eyewear. 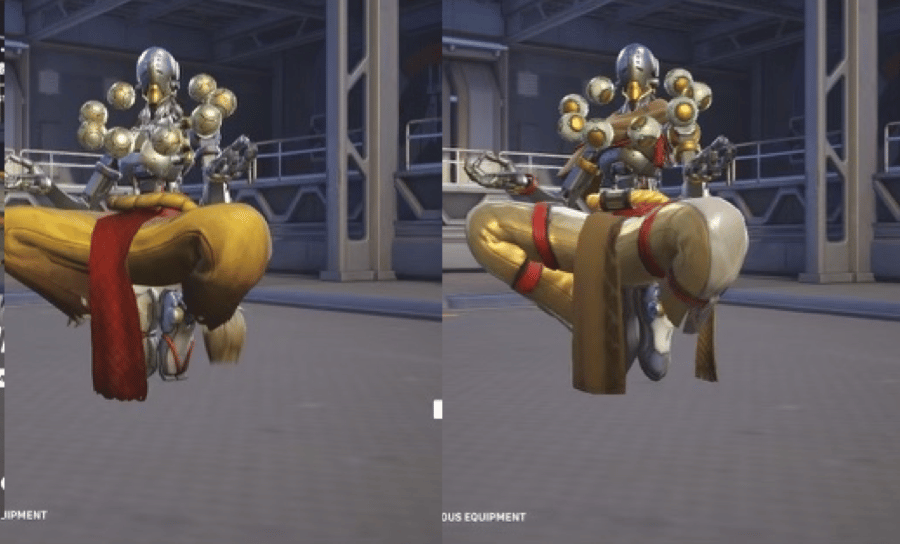 Zen has mainly had his colors changed around, it isn’t the most substantial of all new hero looks in Overwatch 2. Always nice to have a freshen up though. 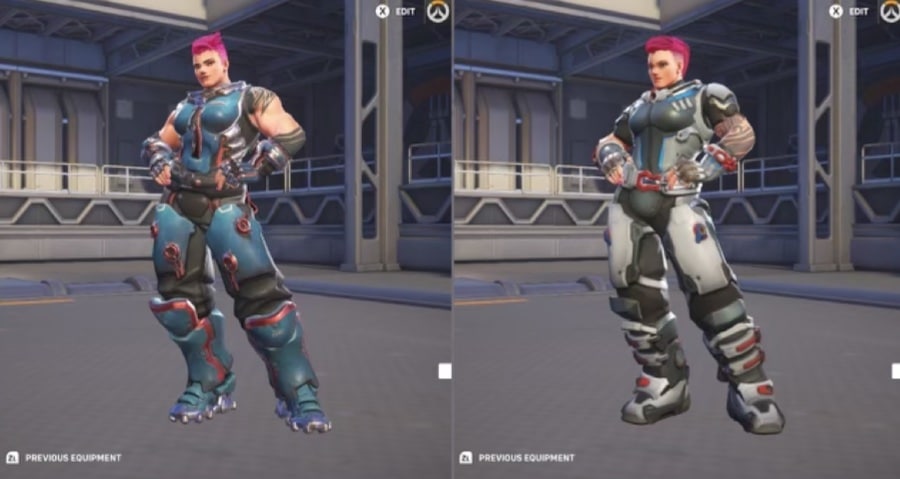 Zarya’s new look in Overwatch 2 changes the color of her armor. It also gives her different tattoos for some reason. She’s also got extra protection with more armor.

Who Doesn’t Everyone Have New Overwatch 2 Hero Look?

Not every character has been freshened up for Overwatch 2. A few of the characters just have the basic standard skin still. These characters don’t have any substantial design changes.

The most glaring of these is Echo. Echo only has one skin. This is probably because the character came out so late in Overwatch 1. This means she’s essentially lumped in with the new heroes who don’t really need a fresh look yet.

The heroes added in the Beta also don’t have a unique design for overwatch 2. Like with Kiriko, this is just because they’re Overwatch 2 exclusive characters.

Since overwatch 2 is an evolving game, it’s possible we get new looks for some more characters at some point. Although, with the way that their monetization is going, this might be one of the last free changes to their designs!