How to do Fortnite 1v1s – Best Creative Codes

This is how you can have Fortnite 1v1 matches across the game modes with some of the best creative codes.

Fortnite’ a massive Battle Royale. There are 100 players in each match. What if you wanted to test your skills against other players more directly though? Fortnite 1v1s are perfect for that.

They are a great way to play, but there is no official mode for 1-v-1s which can make things quite a bit more complicated. While there’s no single official mode, there are methods. There are many ways to play 1v1s, including Fortnite realistic 1v1s that aim to recreate the feel of a late game.

One of the simplest ways of 1-v-1ing in Fortnite is to use creative mode. Players have made a lot of different formats for direct 1-v-1 competitions. These can be simple shootouts. Or they can get more, with specific complex build and box fights that have more realistic late-game situations. The game does have alternatives though. There are even ways to play Fortnite 1-v-1s with friends.

This guide will run you through how you can 1v1 in Fortnite. All the different ways to do it. Along with creative maps for you to get started.

Fortnite is a Battle Royale, but testing your skills up close is possible. These are the various modes that you can 1v1 in.

We’ll run through how you can do each of these methods below. Starting with the easiest:

How to do Fortnite 1V1s In Creative Mode If you want to know how to 1v1 in Fortnite, the creative mode is the easiest way to get it done. In Creative mode, there are loads of different maps and games. These each have their own unique rules. However, they all allow you to fight other players in Fortnite 1-v-1. These are the main types of creative maps and some codes so you can jump in: Box Fights are a type of Fortnite creative map perfect for 1-v-1s. These replicate late-game situations in stacked lobbies, where players are forced into fighting with builds and boxes. They aren’t the most realistic Fortnite 1v1s. However, box fights are a situation that comes up a fair bit.

These game modes limit how high you can build, and force players to occupy boxes. You spawn in with high-tier loot. These 1v1s are mainly about piece control and strategy in a limited situation.

There are loads of different types of box fights. Epic has even hosted official versions of the mode from time to time. These are some of the top box fights maps in creative right now: Build Fights are a type of Fortnite 1v1 which are similar to box fights. However, there are fewer restrictions. These fights start with both players on two ramps facing outwards. You then build back and out. The aim is to recreate a build fight you’d encounter in-game. These are some Fortnite 1v1 codes for Build Fights: The Late Game of Fortnite is the most fun for many players. You’ve got good gear and are focused on eliminating and surviving, using whatever kit you get. The official Late Game Arena is just for trios, but there are solo options. There are late game-specific game modes that allow you to do Fortnite 1v1s. These vary a bit from game to game. However, you typically spawn you in with a decent amount of loot. You’re able to build and generally try to recreate those tense late-game fights. On top of all those game modes, creative has more to offer those looking for Fortnite 1v1s. There are some game modes with more limited rules. Such as both players getting a specific gun. Most 1-v-1s are shotgun fights. However, there are also great maps for testing for mid and long-range fights with a greater variety of weapons. Sniper 1v1s can be a lot of fun and a great way to polish up your skills.

These are some of the top gun-specific 1-v-1 maps.

1v1s in creative are great. There’s a problem for some players though, matchmaking. You’re in lobbies with mouse and keyboard players. For 1v1s, you might just get deleted by someone playing on triple your frame rate and an easier control method. If you want to try and limit things to console, you can go for console creative maps. Although, there’s no guarantee no PC players will get in. These are some of the top maps: Another way to 1-v-1 a friend in Fortnite without using creative mode is Battle Labs. This route only works if you’re playing with a specific friend though, as you’ll have to party up rather than go through random matchmaking. It is one of the quickest Fortnite 1v1s though. To use this method, you must make a playground match with a friend.

It’s pretty simple to set this up. This is how you can do it:

Battle Labs has more options for you to play around with too. In the set-up page, you can change how the match will work. Ideally, you can make changes to things like total damage, loot, and more to configure the game. This means you can set it up or gold loot to make sure you and your partner can quickly find the equipment to loot.

There are drawbacks to this method though. For example, you’ll need to loot. No generated loadout can make things even heading in. This can make it a bit more time-consuming. You’re in the actual game so that it could be a realistic Fortnite 1v1. Some players in Fortnite have the ability to create a private match. This loads in like a normal game of Battle Royale, but players have to input a matchmaking key to get inside of the right lobby. There aren’t different rule sets though. These can be used for Fortnite 1v1s. There are some problems though.

For a start, it’s boring. With only one player in the game, you’re spending most of your time looting for nothing. It’s essentially all just build-up for a single fight. This can be time-consuming. The other problem is not everyone has the ability to set up private matches.

Those with a support-a-creator code for Fortnite are able to use private servers. It’s easier than you might think to get a support-a-creator code. You only really need to demonstrate a following on a platform or another, such as having over 1000 followers on social media. However, this still locks a lot of the player base out. While you can do Fortnite 1V1s this way, the other methods are easier for most players.

How to do Fortnite 1-V-1 in Normal Games 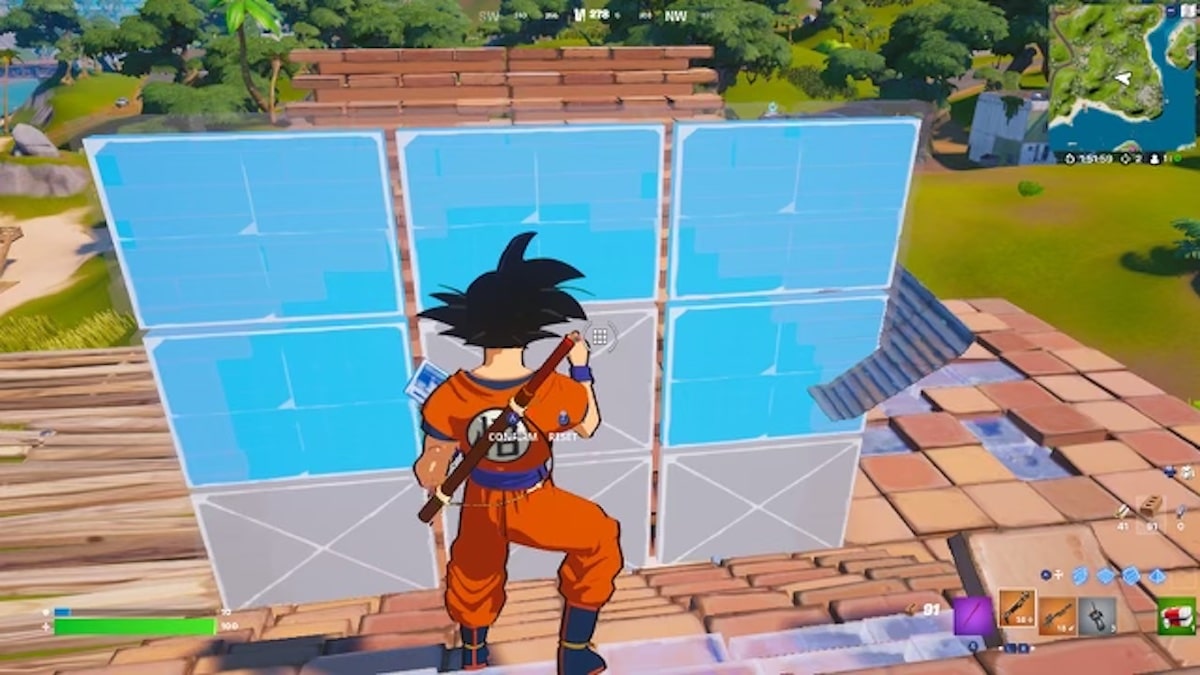 Those are all methods of doing exact 1-v-1s in Fortnite. However, there is one more method. You can try to initiate a 1-v-1 in Fortnite’s normal pubs. This is a bit of a different way to do things than the others, so it’s going to take a bit of explaining.

Players in Fortnite have ways of communicating, even if they’re not on the same team. Over time a few signals have been developed. These allow players to challenge each other to 1-v-1s.

You start by swinging your pickaxe at a player who has spotted you. This is the universal way of indicating you don’t want to fight in Fortnite. From there, you set up the 1v1 if they swing the pickaxe back.

To do this, you need to build two ramps facing the opposite way. The center conjoining piece should be a wall. Both players stand on either side, and when ready you edit in a door and both run to the other side and start building for the 1v1.

If a random player goes along with you in this, you’ve got your duel. However, there are some pitfalls.

1v1s by communicating with the pickaxe are a pretty recognized part of Fortnite. Is this safe though? It gets a bit complicated here. Epic is aware enough of what the signals mean that they know to watch out for it. Communicating between players is strictly not allowed

in competitive game modes. Ever since Epic released new rules, pickaxe swinging or any “movement” could be communication. They aren’t looking for players trying to fight, but those breaking rules.

In regular games, It’s a bit different. As long as players aren’t working together or teaming, Epic won’t typically have a problem. If your 1v1 encounter ends with a player dying, it should be perfectly safe to do one. Be careful though.

The other drawback is that you might just get shot. There’s no working around that. You’re running that risk if you’re challenging an opponent to a 1-v-1 in normal Fortnite. However, it is always nice when it pays off and players are willing to have a bit of fun by turning the end of a Battle Royale into a straight 1v1.

Those are all of the ways you can have a Fortnite 1v1 fight. Some of these are more straightforward methods than others though! Probably the easiest is to jump into a dedicated competitive map. Although, if you want to run around pubs until you find someone willing to play, that works too!

Shrapnel Blockchain Game Reveals Its Trailer made with Unreal Engine 5