The first Ones to Watch players for FIFA 23 have been announced.

FIFA Ultimate Team is the most played mode in every single FIFA game. One of the biggest features of the game is the special edition cards, with Team of The Week being the longest-running collection of special cards. Ones to Watch was a new edition to FIFA 17 Ultimate Team, giving certain players upgrades to their OTW card if they receive a Team of The Week or other upgrade.

FIFA 23 Ones to Watch

Darwin Nunez (Liverpool), Erling Haaland (Manchester City), Richarlison (Spurs) and Raheem Sterling (Chelsea) will be the four players to kick off FIFA 23 with a Ones to Watch card. 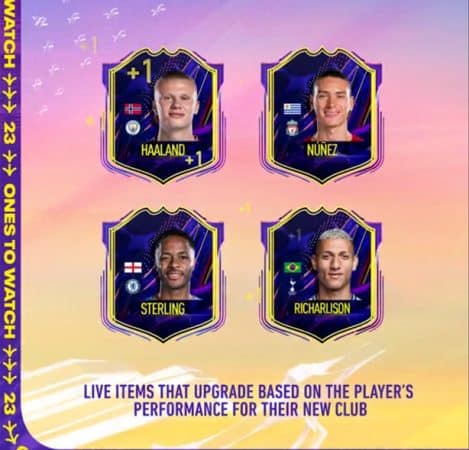 In FIFA 23, Ones To Watch items will upgrade when they receive a performance-based special item such as Team of the Week or Man of the Match.

Ones To Watch players are also eligible for a “Wins to Watch” upgrade, a one-time upgrade to their stats if their team wins three matches out of their next eight domestic league games starting from Friday 30th September.

When Will More Ones to Watch Players be Announced?

More Ones to Watch players will be revealed during the run-up to FIFA 23’s release on September 30th, however, you can get early access with the Ultimate Edition on the 27th, so expect some to come before then. With transfers happening all the time, however, some players wonder what will happen if their OTW player gets transferred during the season.

If an OTW player transfers/goes on loan during the season, the OTW item keeps the player’s latest upgrade until the player receives an upgrade at their new club, or receives the Nations to Watch upgrade. At that point, the OTW item will be updated with the player’s new club and the latest boosted item. If a player transfers to another club before they receive their ‘Wins to Watch’ upgrade, they will no longer be eligible for the bonus upgrade.

The World Cup will have a big impact on the football season this year, and FIFA is using that to its advantage. During the tournament, as Team of the Week is paused, FIFA will be adding a brand new upgrade opportunity for Ones to Watch Items called “Nations to Watch”. Nations to Watch will see Ones to Watch Items become eligible for a one-off In-Form upgrade if their national team wins a game at the FIFA World Cup 2022, regardless of whether the player is on the pitch, on the bench, or watching from home.

Why Indian Content Group S8UL Won At The Esports Awards