LEC Week 6 is here and we’re getting close to playoffs. A day of exciting fixtures awaits this weekend, with Day One no exception.

Check out our Power Rankings for the LEC (or LCS) if you want to get a look at our thoughts.

With AST looking to climb the standings, and SK looking to join them. It looked like a potential banger from the start. A great start for AST, as they successfully ganked the top side of the map. SK, however, quickly turned it around with a one-two punch, picking up two kills for themselves. Moving into the mid-game, AST had a slight lead of 1k. By the time Baron had spawned, SK had re-taken the lead, taking the 1k lead with the third Drake the next objective. At the objective, SK ace AST as they started to look a lot more comfortable on the Rift.  SK finally moved to force the Baron, and in typical LEC style they risked it on a 50/50 and handed the Baron over to AST. SK managed to survive the AST Baron, though the momentum had shifted to AST in the post-Baron game. The second time of asking, SK did claim Baron, and with AST aced they looked to end. SK were able to make it stick, as they caused the first upset of the day. 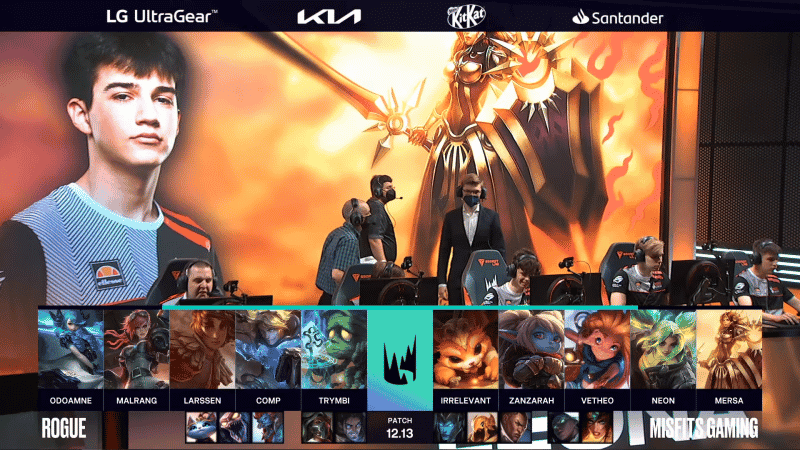 RGE has been on a storm as we approach the end of the LEC Summer Split. Meanwhile, MSF while 5-6 as things stand, are still pushing towards playoffs glory. By the 10-minute mark, MSF had found themselves in a 2k lead, though RGE had already begun to play their game. The game saw little action prior to Baron spawning, with the third Drake likely to be what both sides look to fight over. At 19-minutes, MSF had a 4k lead. The fight at the Drake saw RGE claim it, but the fight went the way of MSF. They pushed down the mid-lane from it, extending their lead to 5k. The fourth Drake saw the next major fight, with RGE picking up the early lead. Despite having a man down, it ended a 3-for-3 with MSF claiming the Drake. With Baron, it was RGE that claimed it with MSF was too slow to react. With Baron, RGE opened up the MSF base, however, they couldn’t do anymore.

The next Drake went to RGE, who had moved back into a 4k lead. With the second Baron spawning, the next fight broke out. Once again, RGE took the early advantage but Neon was strong enough to hold them off, despite his team losing three members. With MSF having to reset, Baron was claimed by RGE once again. With the final Drake spawning, another fight broke out in the river. A two-for-two saw MSF come out the stronger, as they claimed the Ocean Soul. The third Baron went to MSF, and the 5v5 fight after went to MSF, and with no members of RGE left and Baron on their backs MSF secured the win. 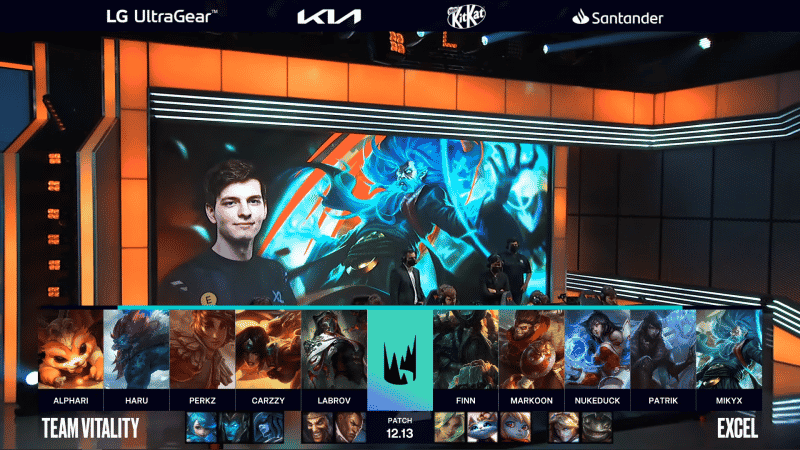 The Super Team against the inform team, could XL continue their run with a win against XL? First blood was secured by VIT, who had missed out just moments earlier on a kill in the bot lane. VIT dominated the early game, picking up four total kills as XL looked out of ideas. XL finally picked up a kill, though VIT had a 3k lead at just 16-minutes. With Baron on the map, it was claimed by XL with VIT instead, opting to push up the map. With XL still behind, they had slightly closed the gap with the Baron claim. As the game moved into the 30-minutes mark, the gold lead was only 2k with it likely having little bearing on things. A second Baron had spawned, as both sides moved to fight for it. The Drake is the next battleground, as XL got off to an awful start handing the Ocean Soul over to VIT. Baron is next for VIT, as they once again won the pre-objective fight as they leave Baron up and take down the XL mid-lane inhibitor. 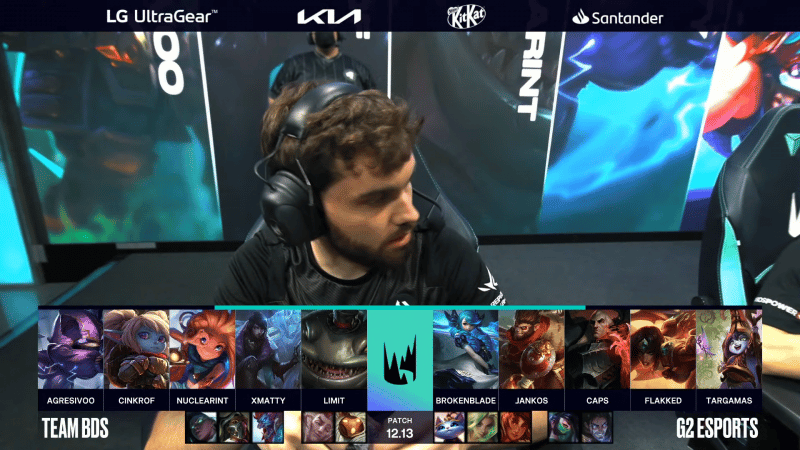 While BDS might be bottom of the LEC, you never know what version of G2 is about to turn up. BDS secured first blood, could they cause an upset? With 12-minutes on the clock, BDS had a 3.5k lead as G2 were G2ing their way to an early loss. BDS once again win a fight, as they dominated G2 in a fight as they went 4-for-1. With Baron about to spawn, BDS had a 6k lead over G2 with the former LEC champions looking for a fight. BDS looked to force the Baron with G2 not alive to react. While BDS looked like they’d done it, G2 were quick to punish as they handed the fight over to G2. Three members of BDS dropped as G2 claimed the Baron. While BDS had the game in their hands, Dragon Soul is handed over to G2 as BDS has fallen apart since they lost Baron. The second Baron is the next objective, and while BDS looked set to claim it, once again it was BDS that took it. With the buff, they pushed down the mid-lane as G2 claimed the win. 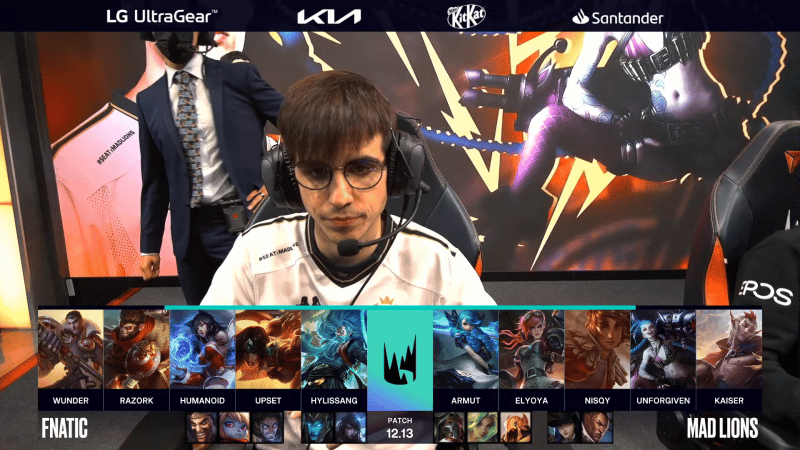 With MAD looking to climb further up the LEC table at 8-3, the out-of-form FNC would be desperate for a win. MAD picked up the first blood, as they looked to pile on the pressure early for FNC. A fight broke out at the Rift Herald, with MAD getting two early kills, before FNC trapped them in their jungle and flipped the fight on its head as FNC walked away with the win. A few minutes later, FNC looked to have found a moment to engage again, but this time MAD were ready for them. They picked off four members of FNC as MAD moved to 3k ahead. The back-and-forth continued into the Baron spawn period, with MAD maintaining their lead. MAD looked to call a quick Baron with FNC caught sleeping. With just 4k left on the Baron, FNC were able to stop the take but it was MAD that got the first kill as FNC walked away. Baron was claimed by MAD, as they looked well on top in this game. MAD beat FNC once more with Baron still up, opening up the FNC base with three members of FNC down.

FNC were unable to stop them as MAD moved to the top of the LEC. The loss inflicted FNC with their worst losing streak in eight and a half years.

Gen.G favored against T1 in LCK Week 7 derby titled Match of the Split

Letter From the Producer Live 72 Announced!

Letter From the Producer Live 72 Announced!

Who is Bernard Chong? Esports CEO under manhunt for smuggling meth

Gen.G favored against T1 in LCK Week 7 derby titled Match of the Split